There has been a little party going on in my body this last week. I sent out invitations to germs, cramps, and even managed a special little invite to the concrete from my knee. "Come on over!" it said. "Bring a side dish effect." And wouldn't you know it, they ALL rsvp'd and showed up at the same time. Which got me thinking.

If I was stuck on a desert island and only got to choose ONE type of medicine to take with me, how on earth would I choose between this: 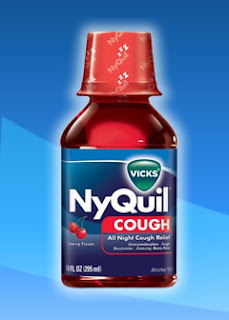 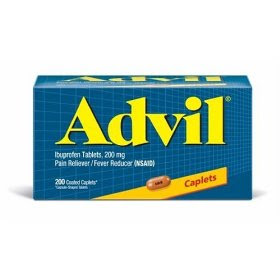 NyQuil is kind of like a one night stand - irresistible in the throws of desperation, but you wake up kind of wondering what you were thinking. Advil is like the steady girlfriend - consistent, predictable, and she never lets you down. I'm just not sure which one would be more critical on a desert island, and for some reason I feel like I need to know. Care to weigh in?
Posted by Vern at 3:27 PM 20 comments:

I've never heard anybody say it better than this. Happy Easter!

(I'm double posting today. Because I can.)

Today you are 9 years old. Old enough to play James Bond on the Game Cube and wriggle away from any affection I may attempt, but young enough to hop on my bed this morning with a grin, waiting for me to wish you a Happy Birthday. Old enough to wipe your own bum, but young enough to wipe with the efficiency of Kleenex on an oil spill. Old enough to dress yourself, but too young to decipher the difference between your bedroom floor and the dirty clothes hamper. Old enough to brush your own teeth, but too young to be interested. I don’t mind, unless you eat a big piece of blue candy that reveals just how poorly I have been supervising your hygiene, then I step in. At any rate, it’s a big day.

Yesterday, on your birthday eve and your last night as a Wolf in your scout troop, we had to hurry up and finish the last of your requirements so that you could earn your badge. That was a lot of fun.
“Drew! Time to come home from the neighbors! Scouts starts in an hour, and you still need to learn the Star Spangled Banner. Hurry!”
“Aww, Maaan! But I want to play with Anthony!”
“Yeah, well, I want peace in our time. You can’t have everything.”
He slumped his shoulders and came reluctantly up the steps.
“Okay,” I began. “From the picture here in the book, it looks like we’re supposed to sit at the kitchen table and meaningfully discuss three ways that people are protecting our world. See that? The Dad is looking introspective and wise, and the boy is smiling from ear to ear. That’s what happens when discussing propaganda.”
“Propaganda?”
“Nevermind. Now hurry up so we can bond over this.”
[Heavy sigh] “FINE.”
“By the way, can you count to ten in Spanish? You’re only three small tasks away from extra arrow points, and we want people to think we care enough about Scouts to do more than just the minimum requirements.”
“Uno…dos….”
After finishing up you asked, “So, does this mean after tonight I won’t be a Wolf anymore?”
“That’s right,” I answered.
Then you faked a few tears, dramatically dabbed away at the corners of your eyes and said, “It’s just so touching,” in an exaggeratedly emotional voice. You, my son, are a trip.

It was just a few years ago that you, Samantha and I went to the park for Family Home Evening one night when your dad was out of town. It was the middle of July so the evening was warm and the grass was still supple and green. After rolling down the steep, grassy slope and watching the sunset, you turned to me and said, “This is the best day I ever invented.” When it was time to go home you and Samantha decided to walk the several blocks, so I followed slowly behind you in the car. I remember driving, and watching the two of you from behind and wishing I knew what you were talking about. Suddenly, you turned around and ran back to me in the car. I thought something might be wrong, so I lowered the window and you ran up and excitedly reported, “MOM! There’s a BUNNY!” Then you lowered your voice to a husky whisper so as not to scare the bunny, cupped your hand to the side of your mouth said, “See? It really is the bestest day.”

It’s a far cry from the interaction we just shared two seconds ago where you complained that your birthday was already boring. Nevermind that I have let you stay home from school so we can go to a movie, the fact that we don’t have plans to fly jets or stage an intervention with Storm Troopers for the three hours before that relegates it to a boring day. As if. I guess the weird thing about you growing up is that I’m expected to grow up with you. I have to face the fact that you think parks are for babies and bathing is for…other people. Your ideal world would use burping and farting in Morse code to communicate and count video games as cardiovascular exercise. I’d like you to work on creating that ideal world, because you would make a fortune and then I could finally get that purse I’ve been wanting.

Then again, I love that you are old enough to hop in the car and head over to the church to play basketball with Dad. I love that you didn’t want to vote for Obama because he had a “wart”, and that you think ketchup is a vegetable. I know that you are no longer enchanted with bunnies, but at the end of the day when you are in bed and drifting off to sleep, I still come in and kiss your forehead and tell you that I love you. And most of the time, you say it back. You don’t have to love me as much as I love you, but my wish for you on this, your 9th birthday, is that someday you will understand just how much that is. Let me just say that if you put Cosmic Brownies, Obi Wan Kenobi, all the MacGyver DVD's and a remote control fart machine in the same room, I love you more than you love that room.

And THAT, my boy, is saying something. Happy Birthday buddy.
Posted by Vern at 9:41 AM 10 comments:

Check out what I'm doing over here today - you won't want to miss it.
Posted by Vern at 7:31 AM 7 comments: