It's a good thing that I established low expectations for New Year's Eve a long time ago.  I could try and make it sound like Cory and I are really fun by telling you we're going dancing tonight, and it wouldn't be a complete lie, but the truth is we get to have to chaperone a teenage dance.  If I was a good person I might find some sort of positive spin to put on this, but the way I see it I'm like the guy at the Carnival who has to clean the port-a-potties; you're not really there to have fun, you just have to make sure everyone else is taken care of.  Having said that, I think if I play my cards right I still might end up taking a hot guy home with me.

Say what you will about 2012, some of you might have wished the end of the world to happen as predicted by some on May 21st.  And then October 21st.  No wait, DECEMBER 21st.  As for me, there were a few days I wouldn't like to repeat but for the most part, I will shut the door on 2012 without slamming it and saying, "I HATE YOU!" and stomping away to my room.  After all, if it wasn't for 2012 I never would have seen my daughter turn 16 and start driving and dating.  I never would have seen my son grow 7 inches and win his first basketball game in 3 years.  (Seven inches!  THREE.  YEARS.)  They are the reason I don't have a career making four figures. 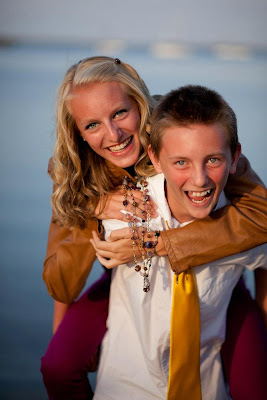 If it wasn't for 2012 I never would have learned about Smashburger, seen my brother on National Television, or run into an Anime Convention with Cory on our date night: 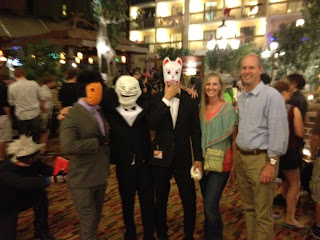 If it wasn't for 2012 I never would have gone to Vail and ziplining with my friends: 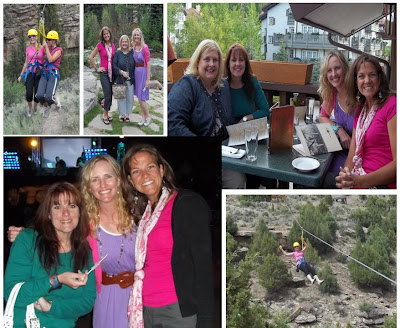 I wouldn't have seen two nephews get married, danced Gangnam Style in my brother's backyard dance floor or learned these important tips at the Salt Lake City Airport: 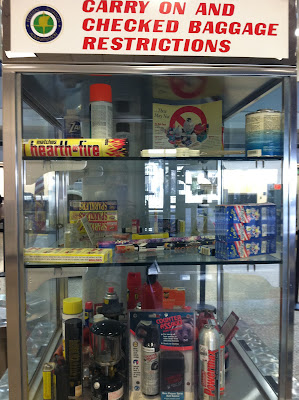 I never would have discovered A&E's Duck Dynasty.  This thought actually causes me to panic and have shortness of breath. 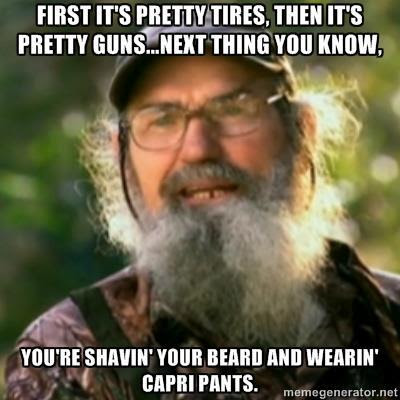 If it wasn't for 2012 I wouldn't have been in the middle of nowhere for Thanksgiving when Cory was awakened with a pain that seemed to be competing for a "How Do You Like Me NOW?" award and had to drive him to a hospital an hour away to get him help.  The doctor wouldn't have given him morphine, and he wouldn't have passed a kidney stone, and he wouldn't have been advised not to show it off to me.  (On a pain scale, the kidney stone is often compared to a woman giving birth.  It's not much to look at, and hard to believe such a small thing caused such immense pain, but I will say this - ever since it joined our family it has never asked to borrow money or left its shoes in the hallway.)  Oh, and Cory never would have caught this fish. 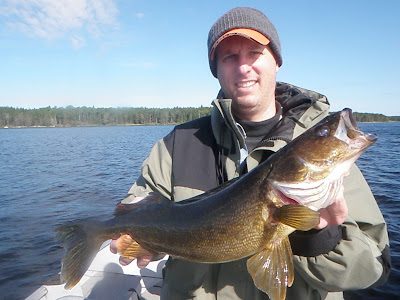 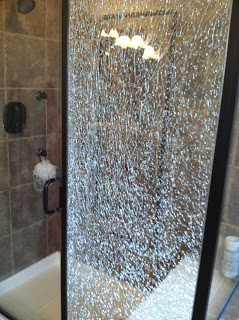 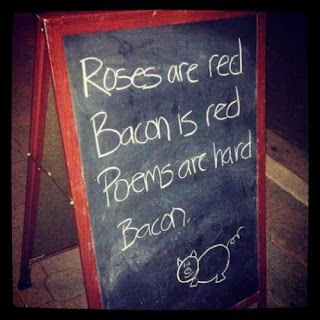 or been able to write these notes to my kids' school when they were late.  (Yes, yes I did.)  October 19th was a rough day. 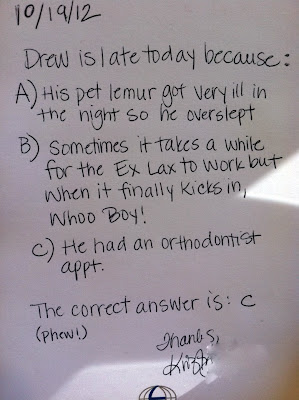 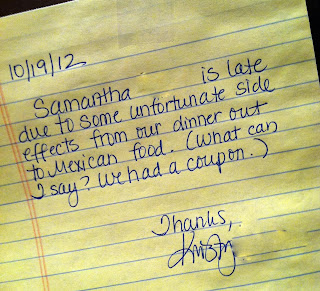 Most importantly, I wouldn't have been able to spend another 365 days with these people. 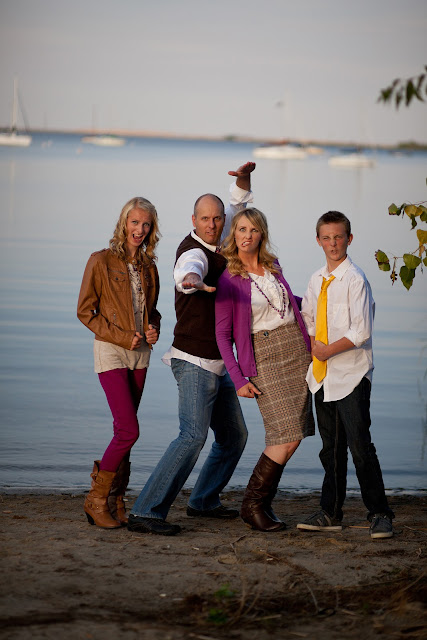 Happy 2013 everyone!  May your kidneys be free from stones, your roadways void of wildlife, your sidewalks lined with bacon, and may the magic of Duck Dynasty fill your homes with joy in the coming year.
xoxo - the Vern Family
Posted by Vern at 1:04 PM 9 comments:

I Can't Even Roll My R's


One of the concepts I've been taught throughout my life is if you want to exercise your faith, even if you don’t feel like you HAVE faith, you can simply start by WANTING to have faith.  Then, letting that desire work in you will eventually lead you to where you want to be.  That’s kinda how I feel about blogging right now.  I don’t feel like I have it in me to do it, but I WANT to do it.  So here I sit, trying to let that desire work in me to see if I can come up with anything to write.  My fingers feel rusty, my brain feels devoid of wit, wisdom, charm, or anything else that would invite you to sit and stay a while.

Did you catch that joke I just made?  I just wrote that my brain was devoid of “charm” as if they were once well acquainted.  Charm is a word I guarantee will never appear on my epitaph.  The day I wax charming is the day Prince William passes gas at family dinner.  I don’t know why but I always think of the Royal Family when it comes to gas.  Did you know that the average person passes gas at least 14 times a day?  That’s a lot you guys, and while the Royal Family is anything but average they are still human.  So maybe for them it’s just 7 times a day.  Still.  Where do they go?  What do they do?  Are there aides who pack travel size Febreze in their pockets JUSTINCASE?  This is what I think about at night when I can’t sleep.  HOW DOES THE QUEEN LET ONE?!

Did you see how quickly I transitioned from “charming” to “royal (gas) pains?”  It’s a gift, people.  Moving on.  (How do you think this is going so far?)

Here’s something else.  A few months ago I was asked to accept a new responsibility in my church community and because I am so nice need something to counteract all the times I drop minor cuss words, I said “yes”.  If you speak Mormon I am a counselor in the Stake YW.  If you don’t speak Mormon it means I go to a lot of meetings, nod my head in support when the teenagers suggest pumpkin bowling for an activity, and periodically raise my hand to say, “How about instead of taking 500 youth to Wyoming to reenact the Pioneer trek to Salt Lake City we just make some foil dinners and watch Brokeback Mountain?  Wasn’t that a nice family western?”  I’m a very integral part of the process.

As part of this job I’m also responsible for occasionally speaking to other congregations.  Recently, for example, I had an assignment to speak in a Spanish Ward.  In other words, no speaky the English during their meeting.  In cases like this they would normally provide a translator for guest speakers such as myself.  That didn’t appeal to me, because it seemed like that would be too distracting for everyone involved.  So, I thought (first mistake), “Hey, I took Spanish in college twenty years ago, I’ll just speak in SPANISH!”

Here was the problem with that.  Nowhere in my talk did I need to tell them I was going to the library (la biblioteca!), or that I needed to buy some lettuce (lechuga!) and milk, or that the bathroom was “over there” (¡El baño está allá!).  And despite the fact that I know a good empanada, make Mexican hot chocolate all the time and have seen all 4 seasons of Ugly Betty, I realized that I was not, in fact, qualified to speak for 20 minutes about Jesus in Spanish.

ENTER:  My nephew’s new, cute wife.  We had just come home from celebrating their wedding nuptials in Utah – she had just received permission to leave her native Mexico for America to marry my nephew.  She didn’t speak English, but she DID speak Spanish and my nephew spoke both.  They rescued me using their gifts of translation, and I delivered my talk as planned in Spanish.  For all I know I announced that I was pregnant and told them all they were going to @#!*% if they didn’t start worshiping false idols but I haven’t heard.  It’s probably best.