Are you gonna make me say it?  Alright, I hated high school.  I don't expect you to care, I just expect you to listen to me talk about it ad nauseam.  Apparently.  To sum up, I guess I grew up thinking I was special and the only thing middle/high school taught me was that I was, in fact, invisible.  Blah blah blah, crocodile tears, puppies die, cheese goes bad, and Channing Tatum won't always look like that.  I spent over a decade of my life living happily before high school and 25 blissful years since its anticlimactic finish, so what I can't figure out is why on earth these people are so excited about the prospect of getting back together to reminisce over "old" times; as if a half rate buffet at the Radisson is the ideal spot for that.  (Gee Vern, bitter much?)  Hey, you would be bitter too if you waited for four years to get acknowledged in the yearbook and this was the picture that made the cut: 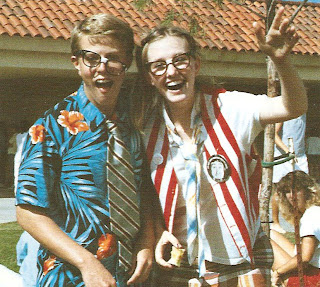 (My friend Chris on the left, Vern-a-licious on the right)

Some people get voted to Homecoming Court, others get spotlighted on Nerd Day.  We all have our place.  Although I have to say my hair in this picture sports an improvement on the one in my Basketball team photo: 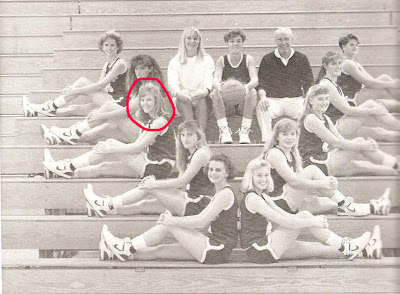 Don't worry, the family of bluejays nesting in those bangs was not harmed when taking this picture.

So the deal is, I was recently tagged on facebook to the page that has been created for the express purpose of advertising our upcoming 25 year reunion.  Out of curiosity I clicked on the link and was suddenly face to face with names I hadn't thought about since the day I walked off of that campus.  And let's be honest, other than the 3 stoners who proposed to me in my yearbook and still need to borrow money and those few that were some of my true friends, none of them have thought of me either.  While browsing some of the responses from former classmates that said who was planning to attend and who wasn't, I found the name of someone I had been very casual friends with but who looked REALLY different in his small profile picture.  I was using my phone so the picture was even smaller but I wanted to see if this was the same guy I remembered, so I clicked on his profile to get a closer look.  And then, to my utter horror a message lit up on my phone, "Friend Request Sent".

I furiously tapped my phone to try and take it back but it was too late.  I'm probably overreacting (ya think?) but I feel like this sends the message that, A) I have been thinking about this guy for the last 20 years and I can HARDLY WAIT TO BE HIS FRIEND!  After all I have so many CAT PICTURES to send!  And motivational QUOTES!  And...and...and pictures of my delicious FOOD! and, B) that I am anxious to relive some of those high school memories.  Listen, if I wanted to relive my high school memories I would just get a job at Abercrombie and try to fit in.  But the worst part?  It's been 2 weeks and he hasn't responded to the request.  It takes rejection to a whole new level to be ignored by someone you didn't even want in the first place.  Now I sorta feel compelled to tell him that for the last 25 years my life has been better than his and that my Dad could beat up his Dad and his ears were always too big.  And then I want all of his lunch money.

My friend, you make me laugh! I have accidentally sent friend requests while facebook creeping, realizing afterwards that it was creepy that I was creeping in the first place and that I really do have other things to do. Ahhhh, the joy of technology.

I loooooved high school. Seriously. Maybe it makes me sound sad but man, it was fun for me. Also, great hair!

And that's why I'll never buy a touchscreen phone.

I'm always speechless when I see those people I causally knew in HS that I have inadvertently (or otherwise) become friends with on FB, living the same life they lived in HS. Partying, posting pix from 1983, getting giddy with excitement over a potential reunion, GAG!! I mean really? Come on people get a grown up life. Be mature and responsible (like me).

You know what I hate? When I THINK somebody has requested my friendship and click "accept", only to find out it was a FRIEND SUGGESTION from SOME OTHER DO-GOODER FRIEND who has spent a lot of time thinking about who I should be friends with and has made time in their schedule to click here there and everywhere in my behalf. And then it looks to the other person that I am requesting THEIR stupid friendship! Ha! Like I even care! No, really. I don't even care. Seriously...it doesn't even matter to me that they're friends with every other member of our class, but for some reason never got around to remembering ME...and now I look all desperate and needy with my click on them. So stupid. So, so stupid! THEY'RE ALL A BUNCH OF STUPID HEADS!

Yeah, so, that's what I hate. Good luck with the reunion. GO BIG HAIR!

So guess what? You can retract! I have done that and if you go to the persons page afterwards where they have the two boxes for "Friend" and "Message" you can click on the "friend"one again and it will remove your request!
Also, I love the bangs!
I've never met you, but my husband wants to get out of the Air Force and move to Colorado and I told him only if he finds us a house by you! :) Then I wondered if that was weird because I haven't ever even met you! btw If your family's vacation brings you to Hawaii that is where we are stationed now!