Once Upon A Time...A Fairy Tale For The Underprivileged

Once upon a time I went five whole days without showering and nobody even died.  Yes, I survived Girl's Camp.  It wasn't even that bad.  A fairy tale, really, if you happen to find cleanliness and civilization to be cumbersome.  Yesterday I was in a store looking at birthday cards and there was one with a cartoon sketch of two bears standing outside an apartment door.  The caption quotes one bear saying to the other, "Look here Earl, all you have to do is push this little button (the doorbell) and out pops a snack!"  Maybe that's funny for regular folk, but coming face to face with a bear has a way of making bear jokes seem...not hilarious.  But despite our bear sightings prior to camp, we didn't see one all week.  We made sure of it, which is why when one of our girls was barfing outside her tent because she was dehydrated we were there shoveling it into a bag.  I guess bears like human vomit.  Filthy animals.  That's when I decided that shoveling vomit at camp is the equivalent to pricking your finger and becoming blood sisters at a teenage bonding ritual.  I'm just saying if any of my camping cohorts ever needs a kidney....

Once upon a time I went five whole days without using a real toilet and I almost died.  I'm pretty sure you don't want me to elaborate on how 250 people went a whole week on 6 port-a-potties, but I'm also pretty sure I never asked you.  Here's the thing - it's not great.  As in, the gas station Subway bathroom we hit on the way out felt like a Marriott in the springtime.  At one point some well meaning campers tried to label one of the "bathrooms" a #1 zone only to allow for at least one stall that wouldn't stink to high heaven.  That turned out to be...ineffective.  Also, high heaven = not far enough away.  On a positive note, the graffiti on the port-a-potty walls was quite motivational at this Christian based camp.  I'm just saying, have you ever witnessed a line from Lincoln penned at a KOA?  I DON'T THINK SO.

Once upon a time our Camp Directors were mistaken for lesbians and I laughed so hard I could have died.  One night our tent and cars were decorated with rainbow colored plates by some "neighbors".  We thought we had cleaned them all up but the next day when our leaders drove to town for some emergency supplies they stepped out in all of their back to nature glory and discovered a rainbow of color still attached to the front grill of the truck.  I'm sure the guys at Ace Hardware didn't judge.

Once upon a time I climbed a massive tree and jumped off and totally didn't die!  And just for good measure I did the Karate Kid stance from the very, very top.  With my tongue sticking out, because apparently I want to send the message that this activity is a Gene Simmons kind of crazy: 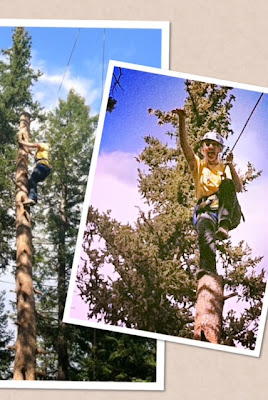 Once upon a time I woke up from 5 days of camping and it was time to go home and all I could think about was getting a shower so when I walked in nobody would die.  I was met with this lovely display - Cory's idea, Samantha's execution, Drew's signature channeled from the 1st grade: 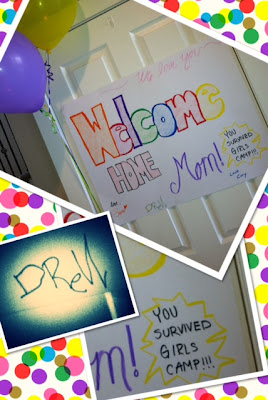 Once upon a time I went five whole days without a shower and a toilet and I jumped off trees and shoveled vomit by flashlight and nobody died.  And then I came home and showered and caught up on Drop Dead Diva and we all lived happily ever after.
Posted by Vern at 10:50 AM

Kristy! I thought we swore we would never mention the l-e-s-b-I-a-n story ever again! And by the way. I may totally take you up on the kidney offer someday. Just sayin.

There is just nothing like girls camp! Nuff Said!--
(oh ya and I'm so glad you are caught up on DDD - fave;)