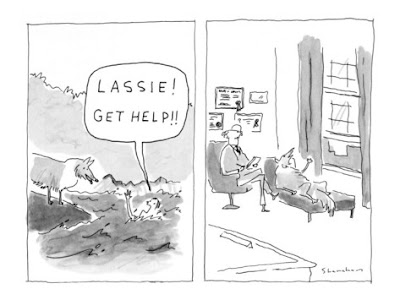 I’ve been open about the fact that I had to seek outside help during a rough patch in my life.  Depression hit me rather soundly after my son was born - it took me a year before I realized I wasn’t going to snap out of it on my own and I sought the professional help of a therapist.  I’m not ashamed of it.  The 12 oz bag of milk chocolate chips that was on my shelf yesterday and is now mysteriously gone, THAT I’m ashamed of.  Beginning my morning with toaster strudel and a game of Candy Crush, not super proud of that either.  But therapy…I recommend it.  If I had $100 a week just sitting around, gathering dust I would still go but with the skyrocketing costs of milk and butter and no plans of becoming a vegan it’s just not in the budget.

We had some good times, my shrink and I.  We laughed, we cried, and on some twisted level I convinced myself that he must have really enjoyed having a client like me that wasn’t as troubled as some.  (You think I’m narcissistic because I have a blog?  Ha!  Child’s play.  *I* thought my therapist LIKED ME BEST.)  “I bet I’m a joy to have in class!” I would tell myself.  Then, as I handed him my last check and told him I would call if I had any relapses he informed me that I was his last client – he was hanging up his hat on private practice and was going to write a book, attend to corporate level needs, and focus more on talking to larger groups about parenting and the like.  I went home and wrote in my notebook 150 times, “This is just a coincidence.  This is just a coincidence.”

Then again when I dig deep, (AS HE TAUGHT ME TO DO) I realize that we had some rocky times, too.
Shrink:  “You seem to have a lot of irrational fears.  Where do you think that comes from?”
Me:  “Oh, I don’t know.  Maybe because my home was robbed three times as a child and strangers went through all of my stuff?”
Shrink:  “Really?!  I guess I missed that.”
Me:  “It’s in the file of 75,000 questions you made me answer so you could get to know me better.”
Shrink:  “I should totally read that sometime.”

I haven’t seen my therapist since I walked out of his office on that last visit.  It’s been ten years.  Sitting in church on Sunday the woman standing at the front of the room was announcing the details of an upcoming event.  “You and your spouses are invited to attend this Parenting class.  It’s going to be really good.  Our speaker is going to be Vern’s Therapist.”  Of course they didn’t say “Vern’s Therapist”, but DUDES.  Let’s not miss the point.  The point is: My therapist.  Is coming!  TO CHURCH!

The lady at the front of the room was trying very hard to convey that this guy was going to be really good.  Should I pipe in?  “Hey you guys, she’s right.  I used to pay this dude a hundred dollars an hour to complain about all of you and he totally took me from zero to hero by the end of the year.  Mark your calendar.”  I chose to remain quiet.  (And now I have that in writing.)  The truth is, it will probably only be awkward if he doesn’t remember me.  THEN what?  I’ll be standing there going, “Remember?  I shut me eyes, you told me to visualize So-And-So’s head and I threw stuffed animals at the wall as hard as I could?”  Then, if it still doesn’t register I could just lean in, smile, look him in the eye and give a quick nudge to his side and remind him, “You know, I was your favorite?”  Then all of the sudden it will hit him like a Viking during hard labor and he’ll be like, “VERN!  Oh my gosh!  How ARE you?”  Then I will regale him with all of the details about how awesome the last 10 years have been.

And then maybe it won’t be so weird that my shrink came to church.
Posted by Vern at 9:40 AM

Hahahaha! I want a shrink! You know, the last time I went to the dentist and they put me on gas, I. WAS. HYSTERICAL! Like, I'm pretty sure they hated to take me off the pig nose, on account of how sharp witted and thigh slapping I was. And when I came down from the high, it was like a pall had been cast over the room. And they were sad to see me go. Because I WAS THEIR FAVORITE! So I totally get it, Vern.

I would stay home and avoid the situation altogether.

I want to hear the ending of this story.

Do that. Say the favorite thing! I dare you!!

I have arrived! I made it into one of your posts! :) II

I'd say he did a good job with you! I'm picturing a long swirling around the room hug in front of everyone between the two of you.

How DO you do it? I love your stories. Thanks for sharing.

We must have gone to different therapists, because I, too, am sure I was my therapist's favorite. I had tried therapy briefly a few times before - about 25 minutes, that's how brief it was. But this guy, young enough to be my son, was the first time I didn't look at him and think "I am SO much smarter than you". And for two years, I never cared who was smarter, just learned and grew. I'm pretty sure I was his favorite.

Most of us have been there. Having a shrink or depression I mean. When I had my first baby, I looked over in the pew at church and my obgyn was sitting next to me. What? Waaay out of context. Worse than having your shrink in church. You shrink has seen inside your mind, but your obgyn has seen inside your...just sayin'