One of my gifts is that I can read people's minds.  People's minds that I've never even met before, and that's how I know you're thinking, "If I could just figure out a way to make this election last a little longer we might actually make it to see the demise of those Suite Life twins...."  Enjoy the journey folks, 'cuz we have two more excruciating weeks to go.  But wait!  Don't go yet, this isn't a political post.  This post is actually about Shrek, and news anchors, and women in real life who look like men in animated life.  Intriguing, yes?

As Cory and I sat and listened to the final Presidential Debate last night, the first thing I wanted to do was wash it all down with some brownies.  Because let's face it, nothing goes better with Syria, Iran and gas prices like a 9x13 pan of chocolate.  But then I remembered my promise to Samantha - I told her I would spend this week before her State Cross Country Competition not eating sugar with her so she could be nice and purged of impurities before she attempts to run 3.1 miles faster than I can walk to the mailbox.  And since I couldn't wash down my emotions and frustrations with a Ghiradelli mix from Costco I was forced to use other coping skills, like laughing at others' expense.  That's how it happened, as Cory and I flipped around to different channels to watch the After The Debate critiques (kind of like "After The Final Rose" episodes of The Bachelor where the happy couple reunites only to break up 3 weeks later) and we saw this woman interviewing various camps for their opinions.  Cory looked at her and said, "Is it just me or does she look like Prince Charming from Shrek?"  I immediately began to chuckle because you guys, it wasn't just him.

I give you EXHIBIT A: 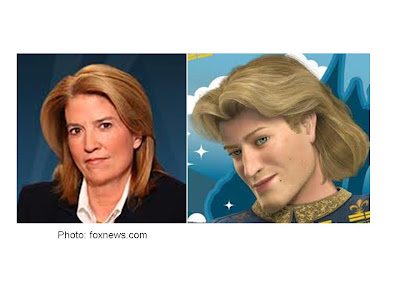 WAIT, IT GETS BETTER. 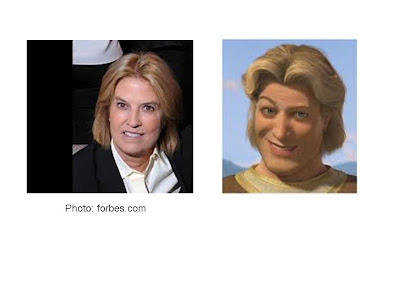 IS IT A HE?  IS IT A SHE?  NOBODY KNOWS.  I haven't been this confused since "Victor Victoria".

Look, they even yell the same! 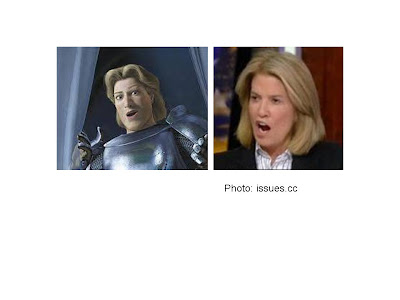 I'm so glad that informed, mature people like me get to vote.
Posted by Vern at 2:31 PM

Bahahaha! You are spot on! And I hate to say the same words over and over again, but you make me laugh.

They were obviously separated at birth!!!! Incredible!

I had to show that to everyone in my family!

I HATE the debates and avoid watching them, but might have actually watched if I knew Prince Charming was moderator.

Hahahaha! Two days later I'm still not over that horrible 1.5 hours of my life. Or at least I wasn't until I saw this. :)

I think you have a gift, and one that keeps on giving at that! So hilarious.

I have no idea if I know you, but lots of my friends follow your blog. And you are funny.

Great. Now I'll never be able to take Greta seriously! If she starts flicking her hair, it will completely do me in.

Thanks for sharing this!! It sheds a much needed "lightness" on all this political stuff!! I am so glad that people like you get to vote, too :)!!!

SNORTING!!!!
That is awesome.

Thanks for making me wish the election were just a little bit further away so we could get some more political posts from you!

Uncanny! You should send that to her - she might even use it!

poor Greta. It's so true.