What Would You Do For A Klondike?

Did you know that Boy Scouts go camping in the snow? True story. It's called a "Klondike", and doesn't have anything to do with ice cream but plenty to do with the butt freezing cold. Since my husband works with the youth at our church who are participating in such festivities, he has to gets to go. Are you with me here people? CAMPING. IN THE SNOW. With 14-year-old boys. Not even Michael Jackson could get excited about that. Speaking of which, Michael, if Billie Jean isn't your lover then who is? I've been meaning to ask you that for a while now.

Anyway, after dropping off Cory at the meeting place, I went to the store and picked up some of these: 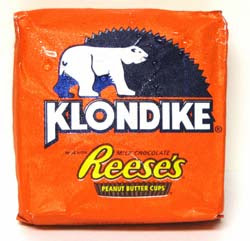 I told him that later the kids and I would have a moment of silence for him and take a bite into one of these bad boys while NOT standing by the fireplace. What can I say? I'm a giver. It's about the only thing I'm willing to do for a Klondike.
Posted by Vern at 4:49 PM

I went winter camping when I was 14. we FROZE, despite our multiple preparations, and in the morning, there was ice on the inside of our tent (the condensation from our breath froze on the top of it). It was awful.

It's about time that he took his turn camping in the snow!!!

I like camping and all, but really don't see the appeal of camping in the snow. Sounds like pure misery to me. The Reeses Klondike on the other hand sounds intriguing.

If "The Office" is going to continue its raunchy streak you're going to have to step up the posts as you will be my only source of comic relief.....my therapy. Seriously.

Oh my those look good. Camping in the snow not much fun. However, Jeremy gets to do that in two weeks. Maybe I'll pick me up some Klondikes!

I think I once went snow camping with Cory when we were youth. I didn't see the appeal then either. (I loved the "giver" line; can totally hear you saying it.)

Good morning, former neighbor. Thought you might enjoy this video.

I'm going to enjoy what time I have left in my gas guzzler!