When I was in college I drove a 1979 Suburban which became known to my friends and associates as "The Beast". (In the Winter months my friend Jon called "The Fridge" because the heater took about 20 minutes to warm up, and most of the places we went were accessible within ten minutes, so it was ALWAYS freezing.) The Beast was incredibly handy when traveling with groups, especially since I drove it before seatbelt laws were what they are today. It was particularly useful one night when my 6’7” friend felt the urge to channel his Inner Hood Ornament and posed himself on the hood of The Beast as we navigated a Taco Bell drive-thru. Awesome. Here I am with my roommates, one of which asked, “Shouldn’t there be a little bar that comes down in front?” when I was driving too fast once for her taste. (And I do mean “ONCE” because I was an excellent driver (hi Dad) who always changed the oil (remember Dad? When you called me on Mondays, Wednesdays and Fridays to make sure I had added oil? Well, I did. On Friday.) and never ran into curbs. Except maybe that one time. No wait, TWO times. But that was it, I swear.) 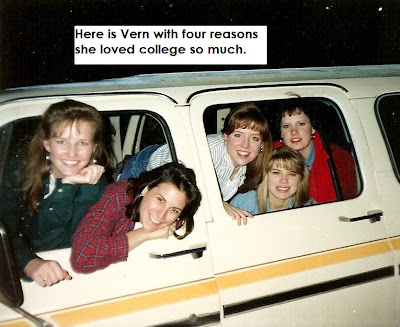 And here I am again when we decided to kidnap a house full of boys in an ongoing prank war that I had engaged in to get my future husband’s attention. And for the record, in this picture I have a necklace of sorts around my head – I would further explain, but it’s the kind of thing that was only funny once, because when you are a 21-year-old non-drinking chaste co-ed at Brigham Young University, thrills come cheap. 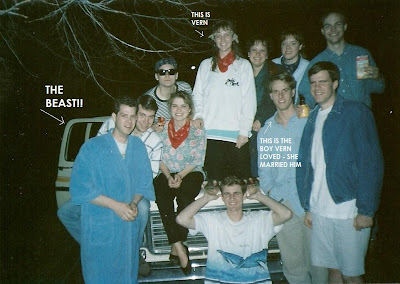 Also, see that guy in the blue robe? Well, his wife reads this blog, and I want her to know that one time we were at the boys’ apartment when he was wearing that robe, and he took a split, blue racquetball and put it on his nose to be funny. I tell you this so you can appreciate how far he’s come, and so you can understand why we nicknamed him “Grover”.

BUT THAT IS NOT ALL. Because, you see, the BEST part about this car is not what you see on the outside (*gasp* Even the orange stripe?!) but what is hiding on the INSIDE. For my 20th birthday my Dad gave me a musical horn for that car.
Flashback:
“A musical horn?! That is so awesome Dad! How do we put it in?”
“Let’s see, I think if we just cut out a hole in this here dashboard….”
“???”
And that’s the day I got my musical horn. After that, with the push of a button I could play songs like “Happy Birthday”, “Yellow Rose of Texas”, and I could even program the Cougar fight song. It was loud – you could hear me coming from blocks away. Had I been in a family neighborhood and not surrounded by college students I fear children would have been lined up on street corners with dollar bills waving out from their hands hoping to score a Good Humor bar. I LOVED it! It was a sad day when that car was no longer a part of my life.

BUT. My life is not over yet, and a couple of weeks ago when my friend and I were discussing our soon-to-be future of our children needing vehicles, the topic of my love affair with The Beast and my musical horn came up. “I bet they still sell stuff like that on the internet,” was all my friend had to say before we were both online, talking back and forth about what we were finding. My friend found it first. “Check this out!” she exclaimed while reading the further advertising on the website and filled me in, “It says, ‘As featured on Pimp My Ride’!” That. Was the website. For me. Ten minutes later I called Cory at work to announce, “You’re off the hook for Mother’s Day – I just bought my present.” So if you’re driving around and you hear the sudden outburst to the tune of “La Cucaracha”, or “The Star Spangled Banner”, or the deep voice of a man saying, “Hey Baby”, it’s either me or the guy from Pimp My Ride. I hope it’s me, because then you could yell out your window, “Hey! I read your blog!” and then we could pull over and go to lunch.

Taco Bell drive-thru sound okay?
Posted by Vern at 9:56 AM

Oh my goodness! Cory and Greg look soooo young. Oh and you do too of course.

I think your horn should play "As Sisters in Zion"

Thanks for the wonderful gift this morning! The laughter was great but the story and photo are even better. See, about a month ago I threatened (in a nice way) to post a photo of Greg sleeping on the couch during Conference that I took with my phone. He said he wanted to see it first and PROMISED he wouldn't delete it. Apparently he had "crossies" or something because he promptly deleted it. I may or may not have called him a liar via text message. I think your little photo and post are what happen when you send such negative karma into the universe! THANK you.

That horn would have been a nice addition to my High School truck which we called the "Lil' Hustler" since those words were written in white letters on both sides. The horn already honked when turning on the blinker--imagine the fun if it had played music, too!

How are you EVER going to choose which song to have play? There are so many options!

Just so you know I also read this page. You have caused my wife to believe that it is OK to post photos of me in compromising situations.

GGG: Just how many "compromising" photos does she have? Oh right. She's a photographer. Oh well, sucks to be you!

Fun post! I want that horn. (You were lucky to have a car of any kind.)I was really poor. :o( Lots of us were so it was fine then. Not so fine now, hahaha!

I'm going to start listening for you. Of course, it might be hard to single you out since I hear male voices saying "hey baby" all the time. What fun college pictures. My car in college was called "the white flame," and ah, the memories.

I'm good with lunch as long as I'm not the hood ornament. I'm more of a roof surfer myself.

And I like Jill's idea. That would be very RS Prez of you.

Oh the horn! That would be SWEET. My roommate had a friend from home with a truck that had a speaker on it. We borrowed it and drove around campus yelling things to people on the street...oh BYU. How I miss you.

All I can think, is poor, poor Samatha...

My first little car was a rusted out VW bug. Turn a corner with a puddle and your leg got wet. But once I came out of school to find some football players had turned it sideways in a parking spot so I had to wait for one of the other drivers to come out so I could leave. Nice horn. I'll have to check that out - but perferrable not while in the car driving someplace with you.....

Will the fun never end?

Oh, the memories! I think I can safely blame "The Beast" as the major influence in my desire to paint black racing stripes over the top of my white Suburban. (Never did. . .but why I didn't buy a horn like yours I don't know?!) Thanks for the walk down memory lane!

May the beast rest in peace.

And also, pretty please drive by my house as soon as that magical, musical horn is in working order. I have a feeling my boys are really going to like that situation. And by my boys, I mean me.

First cars are such fun. My first car was a convertable Triumph Spitfire. You could litterally reach out and touch the ground while sitting in the seat.
We used to make spark trails by holding metal against the pavement (I was young enough to not think about a random spark igniting the gas tank).

The best part was the looks I got when I stepped out of car. Kinda like a circus act, if you know what I mean.

I sooo have to hear that horn! I should have bought it that morning too :) My first vehicle, 'cause it definitely wasn't a car, was also a big gray suburban. The thing was that they were not at all cool back then. I painted "The Beached Whale" on the side of it, lined it with blue shag carpet, hung leis from the mirror and plastered beach bumper stickers on the back. Awww, those were the days!!!

Come on over....we need a little excitement in Newlywed or Nearly Dead land - unless Cajun Baby is actually asleep, then we'd take the horn for a test drive a little later!