Things You'll Never Hear A Southerner Say:  "Duct tape won't fix that!" ~ Jeff Foxworthy
I've had a piece of artwork hanging in my entryway for a long time that I am no longer in love with.  It gets a lot of light in the afternoon so it was faded and frankly, I was bored with it.  So I took it out, covered it with a piece of fabric I bought at (I'm afraid to admit it) Wal Mart, and using a highly civilized and technical process called Use As Much Duct Tape As It Takes, it now looks like this: 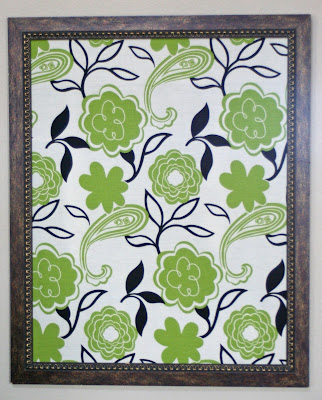 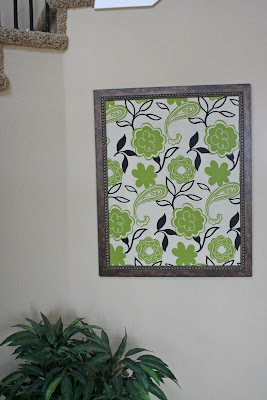 Cory thinks it's lame, but he's trying to be supportive.  I think it looks even more awesome than the $4.67 I spent on it.  Whose side are you on?
Posted by Vern at 9:34 AM

anything looks good when it only costs $4.67, well except leggings with stirrups, those NEVER look good. ON. ANYBODY.

I with you! I did the same thing with some paper and it looks awesome.

I love it just as much as the platter that hangs above your dinning room door.

And duct tape is awesome!

It's perfect. I made fabric wall art recently too and Ryan had a hard time thinking it was a good idea. Don't worry, we're right for sure!

First of all, I think it is beautiful and a genius idea.

As for Cory, just keep reminding him that it only cost the $4. Then throw in that if he doesn't like it you'd be happy to go shopping and find something to fill that space. Then ask him for the extra cash to purchase that little something. My guess is he will start thinking it is more and more beautiful, with each step.;)

I feel the same about clothes and bags too. The cheaper, the cuter!

Beeeyutiful! Martha Stewart look out. I always am thrilled to bits when i 'try my hand' at something vaguely creative ( even if it does involve copious amounts of duct tape...or safety pins) and so i think creative success should be celebrated from the rooftops. Esp if it only cost 4 dollars.

Other than my longstanding confusion about the similarity between "paisleys" and sperm, I think it looks quite nice. DEFINTELY beyond its price tag.

I think it looks awesome!

DEFINITELY on your side! Not only did you spend an incredibly SMALL amount of $$, but you re-used an existing item (so earth friendly of you!) and besides all of that - LUV the fabric! :)

I want that fabric on a pillow in my living room. I love it.

Your side....have you seen our duct tape collection? Hunter orange, digital camo, regular camo, silver, oh and did you know it comes in clear, too?

I love the fabric!

Happy St. Paddy's day! I see you went green in more ways than one. Love it!

Entirely made of awesome sauce. You can tell Cory I said so.

I'm on your side. It looks awesome. Then again, I spent the day removing family photos from frames and replacing them with torn out pages of a book of botanical prints. Is that sort of callous of me?

oh, even if I thought you were wrong (and I don't) if it's between a husband and wife and decorating, I side with the wife... :D we can't show any weakness or our houses will be overrun with plaid, easy chair recliners and 100-inch flat-screens...

I approve. I want to try it!

NICE! I love it. What a cheap (inexpensive) way to change the look of your room! Great idea!

Totally righteous. That was my hippy speak, since the colors have a 70's vibe. Love it!

Way cute! Good for you!

Seems like something you would see on HGTV. Good for you! (and really? Did you want to follow Corys advice on something like this? He is the owner of that neon turtleneck after all.)

Your side, as always. It's awesome!

I totally did that with some fabric and an awesome frame in my bathroom. My husband thought I was coo coo katchoo for framing fabric, but I love it.