I think one of the hardest lessons in life after learning that actors can become politicians and two Fiber One bars can regulate a dormant volcano is when you learn that koala bears are not cuddly in person.  Next up is when you realize that your kids are about to leave home and render that whole Stay At Home Mom gig completely irrelevant.  I've talked about my daughter's impending departure from our home and how we hoped to engulf it in memories this summer here.  The best part is we still have a whole year to beat this to death!  Have I mentioned how much fun I am at parties?  At any rate, it seemed like the least I could do is follow up on that "Trip That Magic Bought" and give you some highlights and quotes from our excursion.  We were gone a week that felt like a month that we wish had lasted all year, and here's how it played out.

We went on a Disney Cruise to the Caribbean.  Are there any other words strung together in one sentence that could sound more lovely?  Other than, "Your kids will never suffer!" and "You just won a sectional from Arhaus!" it's pretty high up there.  I started off the week by taking notes on every dessert I had.  Let's just say that I had 29 desserts in 7 days.  Katherine Heigl had 27 dresses, Kate Hudson lost a guy in 10 days...they'll be making my trip into a movie any day now.  Our best food discovery:  Mickey ice cream bars delivered free of charge to your room ANYTIME YOU WANT.  Say I'm Angelina Jolie, and the Mickey Bars are orphans.  It was like that.

Early on our trip Drew noted an advertisement in our room with the name "Anders" on it.  He decided that was cooler than his own given name and told me we had made a mistake by not putting that on his birth certificate.  Later we had to chastise him for something and he responded, "Anders says he's sorry."  He's kind of a goofball.

Our first stop was St. Maarten where we signed up for an excursion to hike through the rainforest.  I envisioned plucking fresh chamomile leaves and petting chimps while maintaining a balmy glow along my forehead.  I neglected to envision that a 78-year-old man whose body would give out 1/4 of the way down the path would also sign up for this excursion and would result in Cory absorbing MANY extra pounds of weight to help this guy down the mountain.  Either we paid $250 for the world's lamest strength training class or we paid $250 for Cory to secure his mansion in heaven and we made some new friends.  We're gunning for the latter.  One thing is certain, we were bonded for the duration of our cruise.  Before our kids bailed and elected to run ahead of our struggling group we enjoyed a measure of comic relief when Drew said to Samantha, "If a tribe jumps out at us I'm handing over YOU as a sacrifice."
The interesting thing about St. Maarten is that half of the island is Dutch and the other half is French.  Basically what this means is you can smoke pot on one side and go topless on the other, making it ideal for Justin Bieber but not our little Mormon family whose sole exposure to drugs and nudity is Tylenol and bathtime baby pictures.  So we headed for the clothing required side and made a break for the gelato stand.  We win. 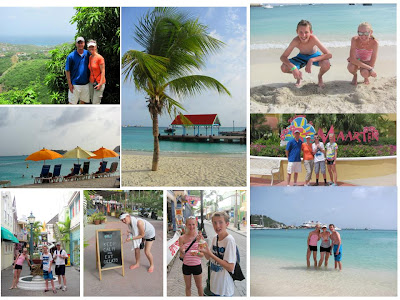 OH MY GOSH!!!! Best description of the Mickey bars EVERRRR! I'm kind of disappointed you didn't take advantage of the opportunity to see how the other half lives—naked and stoned from doobies. But whatever. There's always part 2...

You had me at all you can eat Mickey Bars!

Looks like you had so much fun! I enjoyed your commentary and the trip and Drew cracks me up! I miss you guys! I can't wait for Part 2:)

I had to laugh about the baby nudity pictures.
I'm sure it was most overwhelming!