Going on a cruise was a first for all of us, so there were a few adjustments.  First, the drunken sailor syndrome.  Before we left I couldn't really comprehend how the movement of traveling on a small city across the ocean would manifest itself, but there were times where I felt like I'd had one too many citrus souffles with grand marnier crème anglaise.  IF THAT IS EVEN POSSIBLE.

Secondly, I couldn't get used to being surrounded by people whose only job was to clean up after me and make me happy.  I noticed you had to take an elevator 6 flights and walk a whole half a yard to this all-you-can-eat buffet, you must be exhausted.  Would you like a fresh towel for your weary, propped up toes as you lunch by the ocean?  Have you had 17 mickey bars yet?  There's still 6 minutes left in the day.  Perhaps you would enjoy it more if you were poolside while watching a movie?  Or maybe you would prefer this plush, corner loveseat overlooking the ocean to read that book.  Are you getting so sick and tired of all those clean sheets being changed on your bed every. single. day?  Do let us know if all of that cleaning of your bathrooms while you're at the beach and leaving chocolates on your pillow at night is making you tired.  P.S.  I lied.  I could get used to it.


Third, in contrast to my normal life where I jump when the phone rings because it startles the silence, I was constantly entertained.  You don't get bored on a Disney Cruise any more than you don't get head lice in a refugee camp.  Not even dinner time was low key!  One of the meals we had was in a restaurant on the ship called "Animator's Palate".  During dinner one night we found ourselves engaged in a live conversation via a virtual aquarium with the popular animated sea turtle from Finding Nemo, "Crush".  I don't know how they do it, but somebody, somewhere behind the scenes takes on the persona of "Crush" and he can see the people in front of him, so he talks to his audience.  (You may have experienced a similar activity at Disney's California Adventure.)  Anyway, "he" managed to single Cory and I out and after giving Cory some pointers on how to speak in "whale" (again, inspired by Finding Nemo) he had him stand up in the middle of the restaurant and tell me that he "adored" me...IN WHALE.  I think they expected him to shrink a little at the request but Cory owned it and bellowed something to the effect of, "KristEEee, I adOOOOre yooOOuu."  You could hear it echo to the surrounding tables and then he sat down to the applause of the onlookers.  It was awesome.  Never underestimate an accountant, y'all.

Other things that happened during "down" time:  I practiced my Spanish with a Chilean guest, won a prize from the jewelry store, watched Drew eat snails, danced merengue with our waiter, saw 4 musical productions, solved an on-board detective game, reunited a lost boy with his mother, forced the kids to learn salsa, and eavesdropped on some teenagers talking about their prom from the observatory deck.  Never a dull moment! 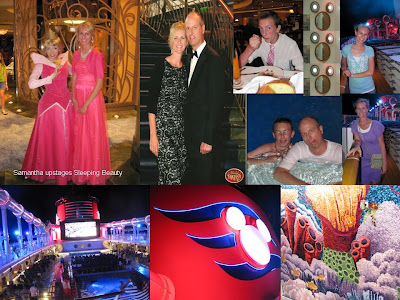 Looks like you had an amazing time! Love you guys lots!

You look so gorgeous, I love the pictures (and the stories). Tell me how seasick you got? I'm cruising in 3 weeks and I'm so nervous about it.

Love the Disney ship, and Samantha TOTALLY upstaged that princess!