Even The Sexiest Man Alive Had To Have Work Done

Dear Universe:  I think you have me mixed up with somebody else.  Specifically, I think you are under the impression that I am independently wealthy and I want to set the record straight before you burden me with any more surprise expenses.  Love surprises, hate expenses.  Capiche?  Please stop crossing your wires.  What with the emergency surgery, both cars needing new tires, our property taxes quadrupling, and the $1500 car repair that was required after sliding on icy roads into a curb, I sorta thought we were done.  Then the orthodontist called and said, "Hey, remember me?  My 2009 Ferrari is on its last leg and I am in desperate need of a new one.  This time, yellow, I think.  Please bring your daughter in for her appointment so we can get the ball rolling."  And I will tell you THIS, universe, the ball is SOOOO rolling.  As in, "I know you've already paid three thousand dollars for phase ONE, Mrs. Vern, but your daughter is definitely going to need a phase TWO.  This time it's going to cost FIVE THOUSAND DOLLARS.  Think you're getting ripped off?  Apparently you've never SEEN the yellow Ferrari.  Call me and I promise to give you a ride sometime.  It's the least I can do."  Are you listening to me people?  EIGHT THOUSAND DOLLARS!!!

Don't get me wrong, it's not that I don't think my daughter is worth it.  It's just that I think two Caribbean cruises would be more fun.  Also, I'm a little worried that the word will get out and before you know it Pamela Anderson will be calling us for a loan to help her pay off the $500,000 of back taxes she owes in California.  (Watch your back, Pamela.  The Governator has your number.  P.S. When he calls, be sure to call him that.  He can't get enough of it.)  Worse yet, what if Bill Gates gives us a jingle hoping for financial assistance to help pay for a personality?  I mean, I know he's loaded, but that's got to cost a BUNDLE.

I understand why straight, white teeth are imperative for certain people.  Celebrities, for example, have an image to protect but they also have the bank accounts to back it up.  Us?  We are an accountant/stay at home family that lives in the Rocky Mountains.  Certainly we should be able to enjoy some of the dental freedoms that the Brits do.  Then again, I also remember what it felt like for me when I got my braces off.  For the first time in my life I was able to look in the mirror and think that whoever landed me "as long as we both shall live" was one lucky dude.  Plus, celebrity or not, don't you think it's better for ALL of us that Celine Dion had her teeth fixed? 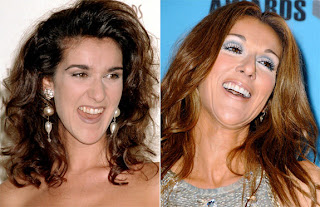 Seriously, that first picture is like, "Sorry, the role of the 80's version of the vampire loving Bella has already been cast."  And the 2nd picture?  Even though she's wearing too much blue eye shadow I would totally trust that lady to watch my kids.  Next up, George Clooney: 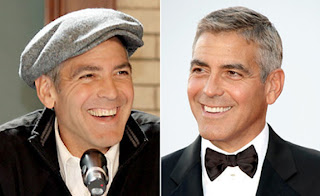 BEFORE: "Newsies" reject.
AFTER:  Well helllloooo Mr. Sexiest Man Alive.
Then again, this might have more to do with the beret vs. the tux. 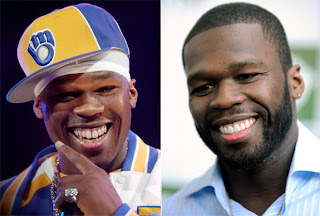 This here is rapper 50 Cent.  The way I see it, at some point this guy is going to be doing the rounds as an inner city motivational speaker inspiring kids to never give up on their dreams.  And when he does, I think his "AFTER" shot makes a better statement.  Plus, it encourages all those successful rappers to spend their new found fortune on something useful instead of pointless bling with their momma's initials. 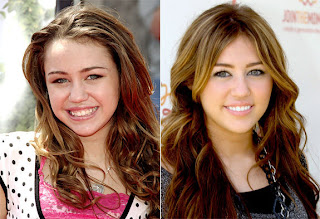 Miley Cyrus.  Sure her teeth look better, but I'm also feeling oddly grateful that in both pictures she has plucked her eyebrows.  Good job Miley, 'cuz your dad is really hairy. 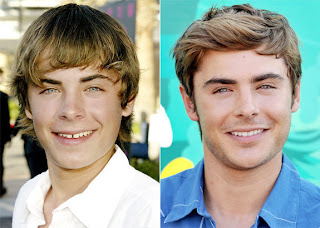 Zac Efron BEFORE:  Aren't you the guy who used to drop all your books in the hallway at school after the football players gave you a wedgie?
Zac Efron AFTER:  Don't you realize that there are OTHER girls to date besides the head cheerleader?  SECOND STRING BASKETBALL PLAYERS ARE PEOPLE TOO!
So, yeah.  Samantha's getting braces.  Again.
Posted by Vern at 8:40 AM

Dang it!! I so remember when my daughter got braces. But it was only $3500. (Of course that was 18 yrs. ago) But that was a lot of money then, I'm telling you. I told her we could have had a nice vacation for that money. I was kind of kidding (kind of not.) But she still reminds me that I said it. Claims it scarred her for life. Oh, please! Surely I did something else that was more traumatizing than that, dearie. Those darn orthodontists charge WAY TOO MUCH. I never had braces and always thought just the rich kids had 'em. I think I was right. I don't advocated bad teeth, but $20,000??? It's wires and glue, doc...It's wires and glue.

Umm, how did you know about all of these celebrities that got their teeth fixed? Those were great pics, especially the Zac Efron one, he should look at that sometimes to keep himself humble, because now he is pretty much perfect.

Ugh.... twice? That stinks. Maybe you should go back to school to be an ortho.

In the last two months, we've received two reminders from the orthodontist to bring the kids in for ther yearly evaluation.

I've chosen to ignore them.

(OK, before I sound like a slacker mom........"Phase one" for oldest son worked well and so far that haasn't changed, daughter's teeth have grown in much straighter than we had anticipated, and second son is still missing some teeth and they don't want to see him until they've all grown in. Plus, eight thousand dollars is a lot of money)

I just posted on facebook yesterday that I HATE the orthodontist. The reason? I took Nate in yesterday, who by the way is also on Round 2, and they told me they thought he needed to see a speech therapist for a possible tongue thrust. I said "Uh, I don't think we'll be doing that. He swallows just fine." And they were all in my face and I got all in their face and when we left the office Nate almost kissed me because I'm not sending him to tongue therapy. What can I say? I now have a lot of leverage with that boy! Yeah, so I hate the Orthodonist. And his yellow Ferrari.

My parents made me get braces and I SOOOO didn't want them! After 4 years, headgear, and those darned elastic thingies I was finally braces free and was sent home with a retainer...which I promptly threw into the garbage can.

I went through four years of braces. And some twenty plus years later my teeth are back to crooked. So my mom paid thousands so I could have straight teeth for a decade. And my orthodontist could have worked at GITMO. I can chew just fine and no teeth are protruding through my lips. There is a reason insurance companies won't do braces - it's a money pit!

Ohh, can I ever relate, We have done three kids in braces and still have three more to go! I could have bought a vacation home somewhere so much more exotic than here!!! Great Post! Thank you for making me laught today!

That's when I just thank my lucky stars that my kids have straight teeth and that Crest has whitening strips. Sorry you are stuck in the double phase deal.

rachey - Google is a beautiful tool!

We were too poor, so only the oldest two kids got braces. I had to wait until I was 25 to pay for Invisalign myself. Not to be weird, but maybe get a second opinion and let them know it. Surely there is some haggling to be done.

Ugg. We'll be making rounds this summer to figure out braces for #1. I am NOT looking forward to buying ANYONE a ferrari - yet, I'm pretty sure it's gonna happen. Dentist has already told us EACH CHILD will need 'em. Yuck.

Just don't forget about your son when it's his turn. My oldest brother had braces or mouth fixing machines for a total of 11 years, and by the time it was my turn, my parents were like "your teeth are fine." because they were better than my brother's by far. So I never got braces, and now if I want the Zac Efron teeth I have to pay for it myownself. Oh, and my brother is now a patent lawyer who makes hundreds of thousands a year and his neighbor is some dental bigwig, so he got a brand new mouth full of perfect teeth for FREE (in which they ground his 11-year-fixed teeth to nubs and put on caps) so they could film it and put it in their promotional videos. And I STILL have bad teeth.

It's just one of those things we "bend over" and take. Booo.

Too bad it's not covered in Obamacare.

Oh thanks, Rachey may be due soon for phase two. I don't want her to have my teeth, but believe it or not, I'm not a rich man.

Tell him he should have done it right the first time!

My kids haven't even lost baby teeth yet and I am DREADING the ortho bills. I've seen their x-rays at the dentist, these kids of mine have camel teeth in there!

Actually, the Roc-man apparently doesn't remember Rachey was supposed to do a round two. But there's just no way. So we do follow ups, tell them it's not possible and they work with us with retainers which she wears faithfully every night. Thank goodness.