When a dude named Byron showed up at my door today to diagnose the trouble with my air conditioning, I was expecting him to find some inane problem that reflects mine and Cory's incompetence.  (I was also expecting him to pull out some sort of monogrammed towel or something as he set to work.  I don't care if you're a service tech or a butler, if your name is Byron you need to embrace the monogram.)  Something along the lines of, "Well ma'am, if you want your A/C to work you should try plugging it in," or "See this button here on your thermostat?  The snowflake button makes it cold, cold, cold."  But no.  After some time in the basement and another 20 minutes outside with hoses and such hooked up to our unit, he began to explain, "The coolant...blah blah blah...extension valve...blah blah blah...refrigerant...yadda yadda..." and as I tried to understand it all I found myself wishing for a mime to help translate.  [The mime begins with his hands together - the hands separate dramatically, the mime's eyes get big, and he gestures a silent "kaboom!"  THAT I can understand.]  Instead I think I stared at the technician like this: 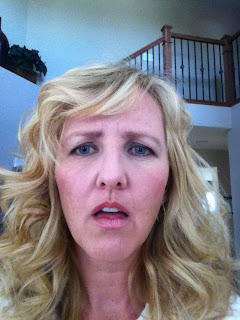 I tried to reiterate so as to confirm the diagnosis, but ended up looking more like this: 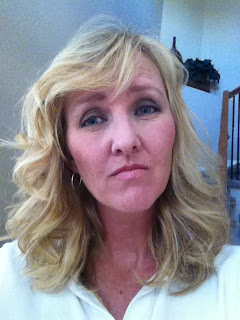 Incidentally, also the face I make when trying to grasp the point of thongs and tongue rings.  Good ol' Byron could see the look on my face but he kept trying, bless his heart.  I think the reason he kept trying so hard was because he wanted to avoid disclosing the dollar amount of this catastrophe, and he wanted me to be able to justify the cost with his explanation.  I'm sure just one day Byron dreams of having a customer say, "Well, of course!  If it's the extension valve that has to be fixed then naturally you need to charge me ONE THOUSAND DOLLARS."  Byron didn't get his wish, but he got a nice dose of this action: 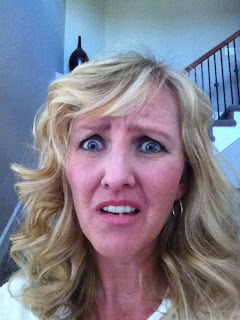 Wow! Total bummer! But I like the pics to illustrate the the convo. You'll never see me making those faces, as you need to actually have a/c in order to go through that, and alas I do not have it.

Isn't your house pretty new? I'd be so mad! Home warranty?

I know that people DO survive without air conditioning (I certainly don't think I could last very long!) It isn't pretty, though! We didn't have it growing up and I seem to remember lots of standing in front of a fan blowing at high speed with my arms at a 90 degree angle from my body so that the fan would cool my sweating armpits! Pretty sure I stood there for the entire month of August. I'll hope for your sake that you get it fixed SOON!!

Thank goodness for home warranties. We had two things wrong with our AC and it cost us $100 total.

That Byron was a privileged man to see the many faces of Vern. Good luck with the AC. Here on the surface of the sun we sort of require air.

Love your faces! Sorry about the AC though...

I feel like I need to send you a photo back...one of me laughing hysterically! Welcome back, my funny friend!! Oh, and about the AC, fall is almost here so you don't really even need to think about it until next summer, right?!

I am reading the words but too busy staring at how THIN you look in those photos.... what happened to all your chins? Ha! J/K I haven't seen you in a while with the long blonde flowing hair and everything... babe-licious! (If you want to delete this comment, you can. :)

Your poor AC didn't have a chance since you keep your house just above freezing 24 hours a day. Poor thing.

I would get a second opinion. The same thing happened to us a few years ago and they told us it would cost $1500, we got a second opinion with Moore heating and air conditioning. They fixed it for $80.

Sounds like everyone's encounter with a repairman or maintenance in my case. Those pics are awesome! Way to accurately illustrate LOL