Holy crap!  Where did the last week go?  I can't believe I left you hanging with such a dramatic post and then ignored you for 7 days.  Rude.  We've had so much going on I don't know where to begin, so let's start with the fact that Cory wants to tattoo my name on the underside of his forearm.
Not really.
Here's what happened.
Some co-workers of Cory's showed up at work recently to proudly showcase their matching tats in the form of an ambigram.  I'll wait while you Google that....  Ok, so now you know that an ambigram is something that looks like it spells one thing, but then you turn it around and it looks like it says something else.  This particular pair had taken their kids' names, formed an ambigram out of it, and tattooed it on their arm.  Not for me, but to each his own.  Inspired, (?) Cory looked up our names and sent me an email saying he loved me so much he wanted to take needles and swirl our names together forever onto his body and be like those that had gone before him.  I was like, "Wait, aren't you the guy who passes out when giving blood?  Plus, you don't even like tattoos.  And what if I die and you get remarried and your wife has to look at my name EVERY SINGLE DAY FOR THE REST OF HER LIFE?  That doesn't seem fair to her.  Also, could you remarry someone named Esperanza or something, because I think that's going to be really hard to make into an ambigram and while I'm totally fine with you discovering happiness after my untimely death, I don't want you to be able to swirl your name together with anyone else's.  And for the record, if she happens to have healthy lady parts and a desire for more children, I want you to know I support that.  Especially if she's ugly, because the last thing I need is to look down and see that your new kids are cuter than ours.  It's the least you can do to honor your dead wife!"
Anyway.
Here's what Cory sent me - MY name:  (using my real name, "Kristy", not my stage name, "Vern") 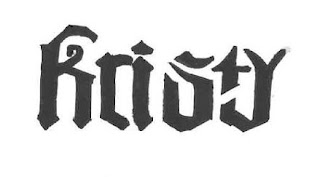 And when you turn it the other way around you can see his name, "Cory": 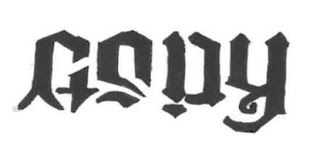 I guess the take-aways from this post are three-fold.  One, if tragedy strikes and I actually DO die soon?  This post will probably be painful for Cory to look back on, and he will probably start looking up women named "Esperanza" on match.com.  Two, now you know the definition of "ambigram".  Three, mmmmm...chili cheese dogs.
Posted by Vern at 8:36 AM

Now I know what accountants do for fun!

I am a secret member of the Illuminati.

He should have saved this for Valentines day

Wow - I just totally wasted 1/2 hour playing on the ambigram generator website....thanks for the mindless entertainment :)

I just need to let you know that I love reading your blog mostly because I have to override my parental controls to do so. Apparently Net Nanny believes you to contain adult/mature topics. And you discuss tobacco, if I recall correctly. Net Nanny LOVES to point out when people talk about tobacco.

So, that's been my week. You're welcome.