When Drew is bored he sighs a lot.  He'll walk around glumly, shoulders slumped, and while exhaling he'll drone, "I'm booooored."  I usually ignore him, which is his cue for a heavier sigh, followed by en extra exasperated, "There's NOTHING to DOOOO."  I look at him and don't say anything, but the furrow in my brow that would make the Real Housewives jump on the phone to schedule botox says, "Say that again and I'll get you a bag and some gloves and you can go show those weeds how there's NOTHING to DOOOO."  He got the point and walked away without further theatrics.  Later, I walked by the living room and saw this: 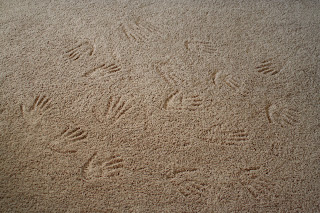 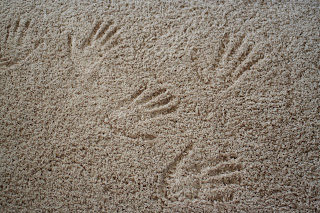 The whole room was covered with Drew's handprints in the carpet.  I guess it's better than pulling weeds.  Then I thought to myself, "Hmmm...'Handprints In The Carpet'." It reminded me of the poem "Footprints In The Sand", which is a poem I hate.  I'm sorry if you like this poem and I just offended you, but it's overdone and I find it...annoying.  Here's a clue:  when something is so popular that people start printing it on small plates for display, it's time for a new poem.  This also goes for vinyl lettering over your doorway that says, "Live, Laugh, Love" or "All Because Two People Fell In Love" or "Life is not measured by the number of breaths we take but by the number of moments that take our breath away."  Now I've really done it - I think all my readers from Mesa, Arizona and Sandy, Utah just un-followed me.  But seriously, stop it.

If you want something more original there is inspiration everywhere. I was in a public restroom once and a four line diddy that was carved into the aluminum doors has always stuck with me:


Here I sit,
brokenhearted.
I came to crap,
but only farted.

Not that I would put that anywhere in my house, but it just goes to show there are other places to get ideas.  Then again, it's your house, do whatever you want.  Who am I, anyway?  I'm just some stupid blogger!  However, as for me and my house, I am likely to display something more like this:


One night I had a wondrous dream,
One set of footprints there was seen,
The footprints of my precious Lord,
But mine were not along the shore.
But then some strange prints appeared,
And I asked the Lord, "What have we here?"
Those prints are large and round and neat,
"But Lord, they are too big for feet."
"My child," He said in somber tones,
"For miles I carried you along.
I challenged you to walk in faith,
But you refused and made me wait."
"You disobeyed, you would not grow,
The walk of faith, you would not know,
So I got tired, I got fed up,
And there I dropped you on your butt."
"Because in life, there comes a time,
When one must fight, and one must climb,
When one must rise and take a stand,
Or leave their butt prints in the sand."
Yeah.  That's more like it.
Posted by Vern at 8:43 AM

I would totally display your version.

And don't get me started on the vinyl. I posted that I refuse to buy any house that has those vinyl sayings in their home.

Wait, did you really rewrite that? Perfect.

And yes on the vinyl lettering, also, stop displaying a giant letter that your last name starts with on your fireplace mantle. It's just silly.

haha...I think your mom is thinking hard about how to respond to this or how to distance herself from you. Couldn't you just claim that someone hacked into your blog? LOL

Butt seriously...misspelling intended... how about Thomas Kincaide cups, calendars and dishtowels? Don't you have a stash of those somewhere in your house?

Live, laugh, love...that is, after you are done crying, whining and complaining about being bored!

I AM living. YOU make me LAUGH. And I do LOVE you. So there.

did you seriously write that? Fantastic.

I'm almost overwhelmed with emotion.
Tears in my eyes, I swear tears.

Now I've got to go take down "breaths take away" sign.

You and I my friend, can be the anti-vinyl! And we'll rid the world of the footprints po... oh, hang on [phone ringing]

Totally funny! (except I have one of those giant letter things.....bummer!)

Actually this poem is not only cute and clever it's quite inspirational...and so true.

I am also opposed to vinyl lettering, the footprints poem and all those over used, over done cliche sayings.

We always laugh and roll our eyes when we get a wedding announcement that starts out "This day I will marry my friend, the one I laugh with, live for, dream with love..." I mean gag me, really?

I also want to try putting some handprints in the carpet.

I have to make this clear, I canNOT take credit for the buttprints poem - I just didn't bother labeling it because it's another work by the famous "Anonymous". As for you, Anita, i know your first sentence could not be more true! I'm not gonna lie though, I kinda like the last name letter thing - I stenciled a "D" on Drew's headboard when we decorated his room earlier this year.

Garden of Egan and Karen - don't ever change. We love you just the way you are.

I actually think it works in kids bedrooms, just not as a family crest.

I'm offended I have a "All because two people fel in love" in my computer room. You suck rocks, but I love you anyway

Where to even begin!? That Drew... what a genius little boredom buster! HIL-AR-I-OUS!

and A to the MEN on the vinyl lettering. I do like vinyl stencils though. Those of us who are DIY challenged need peel and stick stencils.

Buttprints in the Sand? I would frame that little beauty fo sho! 'Course, I'd frame the brokenhearted/farted one too, but probably not for the entry. Perhaps the master bath?

ha. Did you know you have 120 followers. I follow your number of followers. I feel somewhat famous because you're my sister-in-law.

seriously...can't breathe! laughing too hard! funny thing is i had every single vinyl at the last house and was so OVER them I didn't redo them here. You are a spaz and I love ya!

Would you put that poem next to the picture of the temple or the proclamation?? Oh, wait...

The author of buttprints in the sand is Victoria Anderson how do I know because she is my sister and I'm the one who submitted the poem to be published annonomysly when I was in 4th or 5th grade. She originally wrote it for her creative writing class in either 96 or 97 when we lived in Tulsa oklahoma