I haven't mentioned Weight Watchers lately, but in case you're wondering I'm still doing it.  I don't like to talk about it because mostly I don't think anyone really cares, and the last thing I want to do is make people wish for a nearby stake to thrust themselves upon when I'm rambling on and on about how many points their hamburger is.  Speaking of hamburgers, I had one a couple of weeks ago that would sway PETA to trade their vegan ads for posters that say, "Beef.  Everybody's doing it."  Again, this delicacy came from a bar/grill that was featured on Food Network and was honored particularly for their burgers- naturally, a few friends and I had to experience it for ourselves.  I ordered a quarter pounder with all the regular fixin's then added pepper jack, herbed cream cheese and fresh, sliced avocado.

I have to say, I'm normally not the type to venture outside the box when it comes to burgers - I just like a normal cheeseburger with lettuce, tomato, pickles, mayo and ketchup but I'm here to say that The Cherry Cricket has changed my mind, and perhaps my life, forever.  This burger was a revelation, and I said as much on the radio a couple of weeks ago when my local station DJ's asked listeners to call in with the best thing they ate over the weekend.  The DJ's took calls from 5 or 6 of us, listened to our description, and at the end they declared a winner to receive a prize:  $50 in food vouchers at the Taste of Colorado.  And I won.  I won!  So, with vouchers in hand Cory and I headed for a date to the Taste of Colorado in downtown Denver yesterday.  What's the Taste of Colorado you ask?  It's basically a food festival.  A FOOD FESTIVAL!  And I had COUPONS!  So we ate for FREE!  I felt like Joan Rivers at a botox convention.


We had shrimp and chicken gumbo, red beans and rice with plantains, bacon wrapped chicken (you heard me), a coconut samosa, cinnamon cashews, cupcakes, a snow cone, and...FRIED ALLIGATOR.  I knew you wouldn't believe me, so I took a picture for proof: 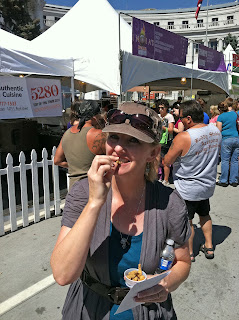 For the record, fried alligator isn't that great.  Trying to mask the chewiness of the alligator with a crunchy cornmeal coating is kind of like trying to hide JLo's butt with a potted plant.  FAIL.  You would think that the fact you can make purses and boots out of the stuff would have tipped me off.  Oh well, here I am with my cute date: 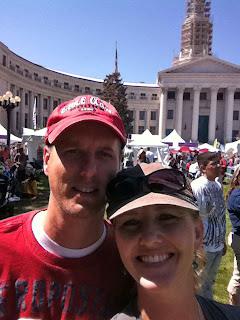 They also had some non-food related booths.  Nothing says "Failing Economy" like "Hand Carved Musical Frogs" for sale! 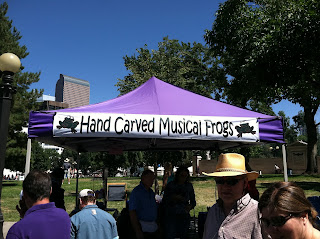 There was a concert.  And a weird guy dancing by himself:
All because I ate a hamburger and talked about it on the radio.  By the way, anyone know how to calculate the points on fried alligator?
Posted by Vern at 10:39 PM

I'm guessing it's 6 points. :) I will go for about 3 weeks being really good at following WW, and then I just forget to do the points. I've been eating out a lot less, but with eating out, you can find all the points information online. I have to guess with my own food I make.

I loved dizzy dancing Dave ... and might I add that you look FAB, simply FAB!!

Sweetness! Every o nce in a while I think tto myself that I should call in to a station to win something but then I get easily distracted ........."squirral!"

Fried alligator.
YUK with a capital UCK!
Congrats on the win though.
Looks like it was a good time. Especially the dancin' dude.
Awesome.

You might want to talk to the WW corporate office about the points of the alligator dish.
They may have an answer.

I love that dancing guy. Did you ask him if he tried the alligator?

Man, i don't know how I missed this one, but I'm glad I went back and read it. You just start my day off right, (and the guy dancing by himself didn't hurt either;)

Maybe the dancing guy had too much fried alligator...side effects?!