It's All In The Reflexes

We are fortunate that Cory doesn't have to travel very much with his job but when he does he goes to one of two places, Missouri or China.  As you might guess there are numerous similarities between the two, like both have people who live there and both have "i's" in their name.  It might stop there.  One of the differences is that when he goes to Missouri he is in and out pretty quickly, but China is another story seeing as it takes two days just to get there.  For real, he flew out on a Monday and got there on a Wednesday, skipping Tuesday entirely.  I think this is good information to have in case you have a really busy, horrible day coming up and you don't want to deal with it - book a trip to China and you can just skip it.  It's a coping mechanism the therapists won't tell you about.

Another difference can be noted in our phone conversations.  When Cory is in Missouri he calls me every night and we can talk as long as we want, and with Cory's passion for talking on the phone these exchanges can last as long as 5, even 7 minutes on a really good day.  Calls from China go more like this:
"Hey Vern."
"Hi honey!"
"I'm not dead or anything."
"That's excellent."
"I had pig's feet jelly and yellow watermelon for dinner."
"That's disgusting."
"Well, this is costing about 18 dollars a minute so I'd better go."
"Ok, bye."
Still, it's nice to know he's not stuck somewhere with Kurt Russell in a semi truck trying to free an innocent woman from a street gang.

People sometimes ask me if I would ever like to go with him to such a far away land, and while there are a lot of far away places that I would follow my one and only, China is not one of them.  On account of the pig's feet jelly, mostly.  The way I see it, if you live in a place that makes a soy granola bar sound like fettuccine alfredo based on your other options, it's probably not for me.

Anyhow, we are really starting to miss him around here and it's not just because he usually drives Samantha to seminary at 6am every day.  Although Samantha has admitted her preference for her Dad's tendency to drive 55 in a 30 when she is late, and my speech about how in 18 years of marriage I have never received a single speeding ticket and Cory has earned...1...2...plus 9...carry the one... I don't know, SEVERAL, is completely lost on her.

For the most part we have been holding down the fort just fine during the past eight days, seven hours and fourteen minutes.  In fact, this last week has included four parenting pay off moments that he has completely missed - I feel badly about it, but at least I can text him certain details and he can mull it over while hunching over his pig footed stew.  However, we did hit a bit of a weak moment without him last night when Drew got home from basketball practice.

I was in the office that faces our driveway when Drew's ride pulled up to drop him off and seeing the headlights hit the window, I got up to go open the front door.  Unfortunately, when Drew came flying in so did a bird.  A BIRD!  WAS FLYING AROUND MY HOUSE!  Samantha was the first to jump in and help out as she shut herself in her bedroom, screaming.  I stood frozen in the entryway at a complete loss for how to proceed.  After fluttering around for a bit the bird calmed down and perched itself at the top of our stairs, allowing me to gather my thoughts.  Which I did, and after gathering them all together in one little pocket of my frontal lobe the one that cried out the loudest was, "Get your camera!"  So I grabbed my phone: 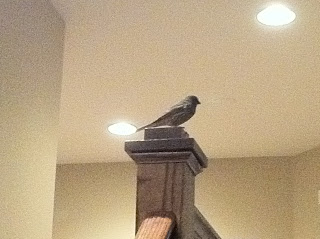 The calm was fleeting, however, and seconds later this poor thing was flying frenzied circles near the ceiling.  I yelled for Samantha to shut all the doors which she accomplished while screaming and laughing at the same time, and Drew and I tried to shoo the bird back toward the front door yelling encouraging things like, "Go toward the liiiiiight!"  Miraculously it listened, and landed itself right on top of the light in our entryway.  At this point it was only a couple of feet from the open door but it wasn't moving, which is when I had my first stroke of true genius and thought, "We should throw a towel at it."  So I threw the towel, the bird went crazy and flew the opposite direction of the door leaving the towel draping off our chandelier like a Flashdance shirt.  This was going nowhere, and now our new friend had cozied up above a door jam.

Drew was still parked near the open front door, Samantha was safely locked in her bedroom, and I stood there on our landing, staring at the bird and wondering how to talk it into being my friend.  And then, wait, doesn't Dad have a fishing net somewhere?  "Drew!  Go see if you can find Dad's fishing net in the basement."  I was standing still, trying to send the bird positive energy about my non-malicious intentions.  Drew found the net and creeped slowly up the stairs, and slid the net my direction.  I grabbed hold and slowly inched my way to the door jam when finally, as I held it over my shoulder I came down quickly and "bam!" trapped the bird in the net.  We grabbed a piece of cardboard, slid it over the net to prevent escape and I scaled down the stairs, went outside, SHUT THE DOOR FIRST, and set it free.  Samantha finally came out of her room and the 3 of us sat down and laughed while simultaneously recalling the previous 15 minutes of our adventure.


Poor bird, I think we scared the crap out of it: 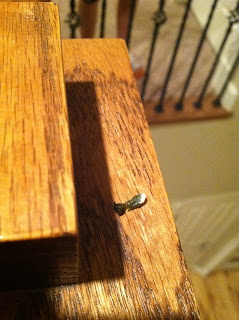 So yes, we've been holding down our fort nest just fine, but we're ready for Cory to come home.  He probably left tomorrow so we're expecting him sometime yesterday.  Can't wait.
Posted by Vern at 8:30 AM

That is awesome! I think you should have done the China thing though. You could have bashed it and cooked it for dinner :0 How fun that Cory gets to be in China. BTW, Skype is the best way to talk in China for free. It saved us when we were there.

My husband's family is from Missouri. We don't visit often, as you can imagine.

So did you get the towel off your chandelier, or is it still there as a testament to your bravery and ingenuity?

Also, can I just pay you to narrate my life? I love your stories!

You didn't scare the crap out of it Kris......that was birdsfoot jelly! Dad

Dix, isn't there an aspect of parenthood that sooner or later turns into sweet revenge? Like when the bird crap on your daughter's inside stairs turns to birds foot jelly?

I love that I can laugh at you at your expense without any bitterness about the fact that you continue to humiliate me on the scrabble board? Love ya Vern. Hope Cory gets home soon.

What an adventure! The more and more I learn about you the more I think we were destined to be friends. My husband is in China right now too. Only I really want to go with him, but alas someone has to hold down the "nest" and care for the little ones.

I say go see the Great Wall, Forbidden City, and Terrocota Warriors. Just bring along your own food. :-)

and I even got the Kurt Russell reference, would you believe it?

Love it! Really, WHO does this happen to? I bet drew was in heaven. Ha!

did you save the crap for Cory?

That capture was awesome, and at least you stayed around to fight the intruder. Unlike me, say, who abandoned her innocent children in a similar situation...

OK, that's is stinkin' funny. Right up to the bird poop part.
I actually had a bird poop in the house too.

Sorry about the pigs feet. You aren't ever gonna kiss that mouth again are you?

Glad life is boring for you.

I totally feel your pain. My husband travels alot. They even think he is a spy at church, with all that he travels. For a year there I rarely heard anyone call him by his real name, it was always "Brother Bourne" or "Brother Bauer". My point though is this- I will happily follow him across the globe to such exotic places like Germany or Italy or England, but after he sent me the video of the blowfish pieces STILL MOVING on his plate, that he had to eat lest he offend his dinner companions, (he was in Japan) I've decided that sticking it out as a single mother of 4 for three weeks beats eating what he had to eat. (Every meal was an adventure)

My first thought was that I hoped the bird didn't poop in your house. So sorry that it did.
While your husband is away, you should hire somebody to be on call 24/7 do stuff for you like catch birds and kill spiders.

I think I've shared my "bird in the house" moment with you before. Though it was my mom's house, I was the one pursued by the crazy bird (I think I was 15 at the time). Mom used a broom, which was probably a lot more upsetting to the bird than a net.

Your adventures never stop amazing me.

Interesting blog Kristy! Fun stuff. :) I'll have to come around here more often for a good laugh. Love ya!

My hubby travels out of the country a bit, too, and I get used to not hearing from him, or only getting a short email, for days as a time.