I say it's not about me, but it's really about me. - UPDATED 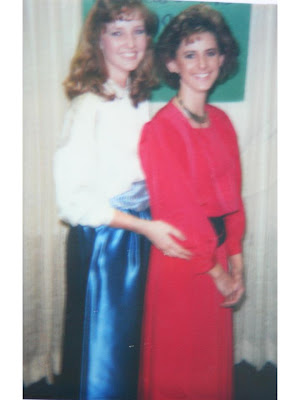 A “photographer” (a.k.a. neighbor of the party planner who happened to own a Polaroid) was taking pictures of couples as they came in.  Having arrived without dates we thought it would be amusing to assume the position and poke fun at “The Prom Pose”, but we also watched Strange Brew about 78 times during high school and considered it hilarious so we obviously didn’t know anything.  Nevertheless, we continued inside where Nicole proceeded to snag the cutest guy there and dance with him all night while I stood patiently on the outskirts waiting for my satin blue skirt to say all the right things.  I attracted boys the way Ozzy Osbourne attracts full sentences, but I win because at least I never bit the head off a bat.
The point is, it’s not about me anymore because tonight my 14-year-old daughter is headed to her very first New Year’s Eve dance.  To my Samantha, I offer you this:  There will be fun songs, slow songs, a countdown to midnight, and adults posing as Fun People waltzing the perimeter.  “Love Shack” is not a slow song, “White Lines” is not supposed to be a fun song, the band Mr. Mister is actually made up of FOUR misters, and I don’t care how cool you think you are if the “Electric Slide” comes on, do it for your mother.
Finally, if you see your Sunday School teacher poised with a camera taking pictures as you come in, SAVE IT.  What was(n’t) funny in 1987 raises all sorts of questions in 2010, beginning with, “Is that really you or did ‘The Facts of Life’ lose a roommate?”

UPDATE:  I made her take a picture before she left and I don't care what you think, I'm convinced she was the prettiest girl at the party.  Oh, and the smartest. 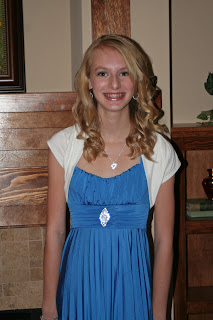 My 15 year old son is going to a dance, my 14 year old son would rather stay home with us... Weird! Maybe I should take a picture of it, chances it won't happen again!

I love, Love, LOVE it when you give advice to Samantha on national blogovision. (Nice term, huhh? You only WISH you came up with it first.) I seriously LOVE your skirt. Did you make it???

She looks beautiful! BUT if you could just figure out how to get her hair as puffy as your hair was, she's be really, um, something!

Wow! What a beauty! I still remember my first New Year's Eve Dance - I was five and that sneaky Brandon Ryan snuck a kiss before I punched him in the gut.

Needless to say, it wasn't a very successful night for me.

Are you wearing a lighter color blue cumberbund? A scarf would have made the look complete.

That gorgeous, smart daughter of yours did top the dance! Which is infinitely better than table top dancing at the dance. I'm just sayin'.

I wasn't at the party, but I bet you're right. She's beautiful!

You both wore blue, but Sam's will not look stupid 20 years from now, not like yours does.

You both wore blue, but Sam's will not look stupid 20 years from now, not like yours does.

White and blue... it's a family affair!

So we crashed Gem's dance, posing as chaperons. They don't really dance at all anymore. What they do is stand in the dance floor talking in groups. When the chorus comes on everyone puts their hands in the air and bounces up and down. It is totally bizarre!!!

I just love that you and Samantha are wearing basically THE SAME DRESS 25 years apart. Blue skirt, blue cumberbund thingy, and a white shirt or jacket. When Samantha's daughter goes to her first New Years Eve Dance, she has to do it too now.

Google reader just suggested your blog so stopping by for the first time - and was also struck by the same sames!! The outfit and the pretty faces :)