I've been surprised a few times in my life.  When I was 16 my parents had a surprise birthday party for me and I was surprised that Steve, the basketball hot shot who I hoped would become the father of my children, was there.  I was surprised when my audition tape for Regis & Kelly didn't get a call back.  (Although in hindsight, NOT surprised.)  I was surprised when I shared a sidewalk with Pierce Brosnan, stole a kiss with a fellow intern at a party in Washington D.C., and didn't get mugged by the creepy German businessman who followed me and my sister out of the subway in Munich.  I was surprised when Tom Cruise and Nicole Kidman broke up, when Donald Trump got his own show, when John Travolta became a Scientologist and when Cher's daughter became a man.

Most recently, however, I was surprised Friday night when I thought I was going to dinner at a friend's house and walked into a room full of people.  There were black balloons claiming "Over The Hill" messages and shouts of "Surprise!" that emanated from the family room as I rounded the corner.

A surprise birthday party.  This time there was (thankfully) no Steve, and I already stood by my favorite person and father of my real children.  I stared in amazement at the small crowd gathered in the room, but ultimately fell on the real shocker:  my friends who had FLOWN IN from Idaho and Montana to be there. 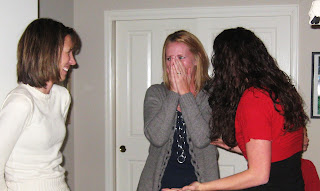 I'm not sure what Jill was so surprised about, but I'm not surprised that her mouth is this big: 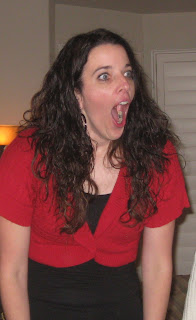 I wasn't surprised to get an "Old Fart" pen as a gift from a friend who affectionately greets me as "Butthead" or "Dork" when she sees me, or to witness Jill forcing Ganelle and Lorie to sing a song about my favorite things.  However, I was a little surprised with my new, pink Snuggie from Ali.  (With a bonus night light!)  I have longed for the Snuggie for years, never imagining that my dreams would ultimately be realized.  But look!  I decided to pose next to the official Snuggie girl just to show that the infomercials are SO. TRUE.
YOU CAN WEAR IT WHILE WATCHING TV!

YOU CAN TALK ON THE PHONE AND STAY WARM AT THE SAME TIME! 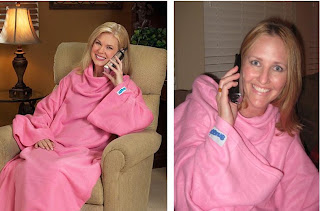 HAVE YOU EVER BEEN COLD WHILE SITTING ON THE COUCH AND READING A BOOK?  NOT ANYMORE!  THE SNUGGIE KEEPS YOU SO WARM YOU'LL SMILE LIKE PAULA DEEN AT A BUTTER CONVENTION. 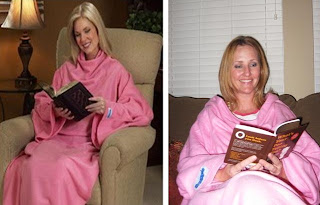 SPEAKING OF BOOKS, VERN HERE IS READING ONE THAT HER S.I.L. GAVE HER FAMILY LAST YEAR FOR CHRISTMAS. 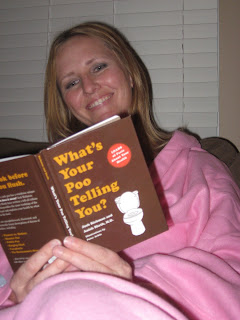 AWE.SOME. That is so completely cool! I've never had a surprise party, but to have friends fly in? That's way cooler than anything I've heard of. Beach. Turning 40. Parties. Snuggies. Could your life BE any better?

When you said your friend from Montana had flown in I had to double check that I was still here in Montana....just sayin...

Do you really want to start the game of posting really bad pictures of each other on our blogs. Seriously, I look like Mr. Ed.

That is awesome!
I had no idea people were longing for snugglies (other than my 2 daughters)

But Cher's daughter became a man? I have something to google now!

I LOVE that book, my mom got it for me as a stocking stuffer last year. My favorite is going #3. By the way you look like you've lost quite a bit of weight.

You don't look a day over 21. And I'm not just saying that because I want your snuggie.

Why is my mascara running down my face you ask?

I just read this post and laughed until I cried! You are such a dork! That is why we are friends!

What great friends. I have read that book at Shay's and laughed my (well you know) out.

You look so comfy and warm in your snuggie!

You look MUCH better than the lady in the Snuggie picture! Hey, why don't you get your make-up done at Norstroms before posing for the photo shoot?

Thanks for the fun time! Just looking at you makes me laugh (in a good way).

Awww. You know if I'd known, I would have flown in for you, too. Happy, happy, happy 40th!

So can you use the loo while wearing a snuggie? Inquiring minds want to know.

You look beautiful in your Snuggie.

Oh Kristy,
I'm so glad the Snuggie made your blog! And btw YOU are soooo much prettier than the lady on the box! Happy 40th!