Ho's Are People Too!

A couple of months ago a few of my friends arranged for us to participate in the morning show of one of our local radio stations.  Every Friday the station allows ten of their listeners to come in and observe, be part of the conversation, and ultimately share some air time while playing a game at the end.  Here's Laura and I as we first came into the studio: 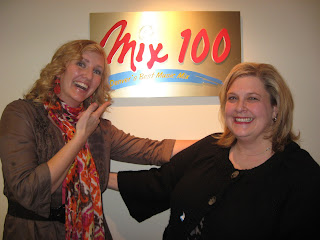 One of the first things they asked us to do when we got there was fill out a questionnaire.  It asked things like, What do you do for a living?  What are your hobbies?  And, How did you meet your significant other?  Later, I knew they would use these questionnaires to ask us stuff when we were on the air.  I understand that it's a good idea for a conversation starter when you have to circulate 10 radio rookies through the system, but it's times like that when being a stay at home mom who likes to bake and met her husband at BYU is a serious downer.  I mean, if you were on the radio introducing yourself to 250,000 people wouldn't you like to say something like, "I met my husband when we were on a National Geographic tour studying the Aborigines, I am a professional cheese taster, and in my free time I like to use pomegranate juice to dye old clothing and sell it on eBay for a profit"?  Alas, I tried to make it seem interesting that Cory and I played on a co-ed basketball team together but I think it came out sounding more like, "I went to Baskin Robbins and ordered Vanilla.  WAIT.  With a waffle cone."  Oh well.  Here I am at the mic for my brief radio stint: 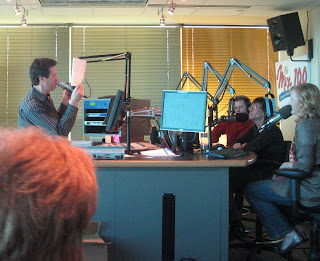 I blew it up because see that guy in the rust shirt?  His name is Jeremy, and I can't remember what I said exactly but the dude is scared.  Do you see how he's looking at me?  I think he's feeling replaced. 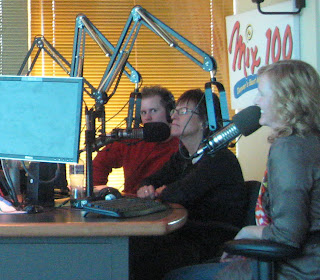 Jane is the one in the photo below with the short brown hair in front.  She is the co-host of the show with Dom (the only dude in the picture) and after Laura was the first to take her time at the microphone Jane mumbled on the air, "One crazy lady down, three more to go."  I'm not sure if she was genuinely annoyed with us or if she was trying to be funny (my vote:  genuinely annoyed), but we made her take a picture with us anyway. 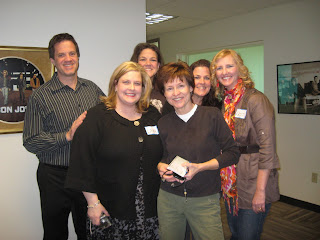 Finally, it is customary for the Live Audience members to bring goodies to share with the group.  I took this responsibility very seriously, put on my overachiever hat, and whipped up these bad boys: Chocolate Cupcakes with Maple Buttercream Frosting, Candied Bacon, and a Burnt Sugar Embellishment (p.s. They didn't suck, if I do say so myself.  And I do.) 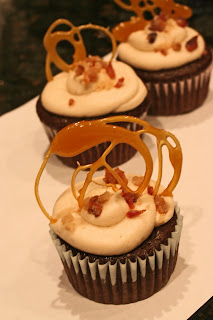 A couple of quotes from the morning:
Dom:  (After a heated off-air debate about cheating) "Hey, ho's are people too."
Ganelle:  "I AM adventurous, I just don't want to die in the Bermuda Triangle."
Ginger:   "You should probably know that the four of us were all virgins when we got married and have been with the same men for 17-21 years."

And guess what?  We won the prize!  Maybe you wouldn't be the sort to get excited about a duffel bag with a casino's logo on the side, but that's not the point.  The point is, free duffel bag!  The bad news:  apparently I am going to be a Klingon in my next life and my forehead is already beginning to take shape. 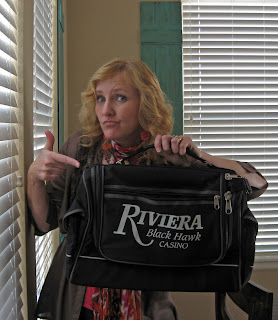 I have a feeling Jane and Dom were scared, too. But I would have loved to hear this. We listened to them at my old job, so you were just about a month too late for me to catch it.

I listed to Dom and Jane every morning when I lived in Denver. I loved that they let people come to the studio on Friday's and I always wanted to. You have to be there WAY to early for my taste though. I wish I could have listened in though. I'd love to hear you on the radio!

I love the hair...has it been that long since I have seen you? MOM

I'm just glad that YOU did the baking. I don't think my chocolate chip cookies would have gone over quite so well!

Oh now.... you left the best quote off... and only You, God and Dom know the truth! LOL You crack me up! I just love ya!

After all these years, you still crack me up. Hope all is going well for you guys. Brian gets excited every year for your Christmas card. He finds them very clever. Take care.

I was drawn like a moth to a flame by your title and held captive till we got to those cupcakes. Candied Bacon????!! I am extremely curious and a little disturbed--I must know more.....

I really wish I could have heard this! I'm sure it was hilarious!

And hello...recipe???? What kind of blog is this if you aren't posting a recipe? Sheesh...

I think you should own your own radio show. I would listen everyday. I miss you.

I was hurrying to read to the end, because I knew there must be a prize involved! Congratulations! It's those fancy cupcakes that did it.