My Wii is giving me flashbacks.  There are dozens of songs on our “Just Dance” game, and one of our favorites is MC Hammer’s “Can’t Touch This”.  (Jill:  Yes, you should know who MC Hammer is.  Shut up already.)  The song may be old but the beat still urges me out of my chair.  However, every time I hear this song I am suddenly 20 years old in a Georgetown bar clearing the floor with a guy named Mike while my summer crush looks on.
Here’s what happened.
I was working as a waitress in a cocktail bar.  Wait, wrong song.  I was working as an intern in Washington D.C.  Yes, that’s more like it.  See? 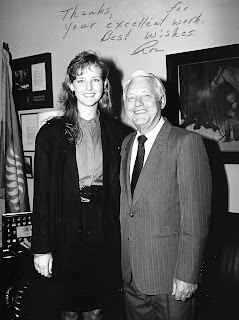 At the time my sister was the Executive Assistant for a California Congressman, and when we figured out that I could intern for their office over the summer while simultaneously earning college credit, I jumped at the chance.  It was one of the best summers of my life, and not just because of the super cute guy who worked at the Republican National Committee down the hall or the chocolate/peanut butter frozen yogurt that you could get from the cafeteria every day.  Except that had a lot to do with it.  Anyhow, I acquired a rather large crush on said RNC hallmate, so when he invited me out to play sand volleyball with some other Capitol Hill interns and employees after work I went for it.
We bumped, we set, we spiked, and following our two hours having fun in the sun one of the guys piped up about a bar in Georgetown that was having some intern specials on beer and recommended we move our little party over there.  As the only non-drinker in the group I was going to opt out, but RNC guy talked me into coming just for the company, no drinking required.  I relented.  (This was a bold move for someone like me – I didn’t drink, smoke, sleep around, or even say “dammit” at that point in my life.  I still don’t drink, smoke, or sleep around.  The end.)  “Hi Cute And Persuasive, meet Mormon And Naive.”
We caught the subway to the bar and entered the doors where I was instantly surrounded by a mob of thirsty, desperate souls, clamoring their way to the front of the line, waving their bills in the air and yelling their orders over the music and the crowd to the woman at the counter.  “Can I get a beer?  I need a beer!  Three beers please!”  The woman finally got to me and asked me what I wanted to drink.  It was like asking Martha Stewart what kind of Velveeta cheese she prefers.  “Um…can I just get, like, an orange juice or something?”  “What?” the waitress yelled back.  I tried a little louder, “An ORANGE JUICE?”  “We don’t have orange juice!!” she retorted.  I may as well have asked for the sun to come out at midnight, so RNC boy took me by the arm and steered me outside where we searched out some fast food.  After a quick dinner we made our way back to the bar to visit with the rest of the group where it was announced that MC Hammer had been requested, and a guy named Mike and I committed to dance to it before we left.
But it was taking a really long time.
It was getting late, the subway had a schedule, and I was inching closer and closer to the last pickup time.  I was also dependent on RNC boy getting me to the station because wandering around an unfamiliar town at 11pm alone didn’t seem like such a wise idea, ESPECIALLY if I ended up missing my ride.  (Mom?  Dad?  You doing okay here?  I’m not sure you’ve heard this story before.  You were probably home watching Rush Limbaugh when this was all going down, thinking Sooz and I were just hanging out at her townhouse playing UNO.  Psych!  P.S.  This story ends well, which reminds me - thanks for paying your tithing.)
“I really should get going,” I said.
“Just one more minute, the song should come on any time now.”
[It’s been a minute!]  I looked at my watch, “I really have to go,” I said to my crush, begging him not to leave me stranded in Georgetown.
“It’s okay, if you miss the subway you can sleep at my house.”
?!?!?!?!?!?!
Did you know that sometimes God answers prayers that the rap music in a bar will come on faster?
[the speakers blared]  “Hammer Time!”
That’s my cue!  Mike and I headed for the center of the mob and busted out our best moves.  It's important to know here that NO ONE ELSE was dancing, so when we took the floor everyone in the joint made a circle around us and began clapping and cheering us on.  Mike was probably drunk, and I was stone cold sober and praying that the subway wouldn’t leave without me.  When the song ended RNC boy and I ran outside, rushed to the subway station, and I stood there, panting and hoping against hope that the line to Alexandria would come.
It did.
And now MC Hammer and I will live on forever in my memories.
And while playing “Just Dance”.
Posted by Vern at 10:11 AM

Bonus points if you can tell me the movie that lines from.

Sorry that last comment was from me, wrong computer, lest you think Keri is crazy or something

My life is so boring!


I sorta think you should do a vlog of you busting out the moves.
Really.

I love that story! Why haven't I ever heard it before? Was that Congressman Packard in the picture? His niece is my friend and lives up the street from me. It's a small world dance.

Kerri/aka rocslinger: don't know that movie
garden of egan: not on your life!
ria: yep!

That's the end of the story? At least for that day, I guess... Are your parents okay? :)

They didn't have orange juice? Rude! Perhaps you should have asked for a "Virgin" Tequila Sunrise (aka. Orange juice).

Thank goodness it was "Can't Touch This" that you were dancing to!! AND that you meant it! :)

I don't have a video camera!

I think it sounds great!! I was just thinking today that I should get out one of the WII dance disks and have an evening with the girls!!! (usually I watch and they dance!)

If I have to, I can vouch for Vern - she has some sick Hammertime moves. Even if she's too chicken to accept the double dog dare...or tries to use the lame excuse that she has no video camera. 'Cuz I'm pretty sure she knows someone with a new iPhone, and they have cameras, right? Just sayin'.

haha...as for following you around with a camera---only if you bust out those MC Hammer moves!! LOL

The subway to Alexandria, and the bar hopping, are nothing compared to the midnight train 'assistant' in Germany? MOM

I love this story! Sometimes genuine naivety leads to the best adventures of all.