And Now You Know The Rest Of The Story

If you have followed me here for very long you may have noticed my frequent yet brief references to my adolescent love of Pierce Brosnan.  At this point, however, I feel it is necessary to stress that there was nothing brief about my obsession with Pierce Brosnan and all of his Remington Steele-ness of the late 1980’s.  I loved him.  When his wife died I felt sad for him, and if he had taken the time to return my calls he would have known that.  When the show went off the air, I wrote NBC a letter and begged them not to steal my happiness.  I wrote about it in my journal every time I watched the show on Tuesday nights at 9/8 Central.  One time I saw his picture in a magazine and was so inspired I used a drawing technique to sketch my own copy of it: 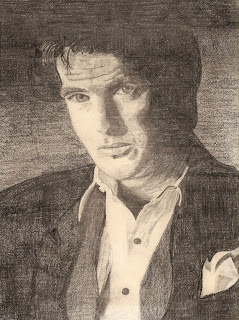 I have even forgiven him for running like a dork and agreeing to sing in Mamma Mia.  I can do that because I’ve seen him walk along the beach in khakis and a white linen shirt.
Which brings me to my next bit.
The year was 1989.  I had just wrapped up my first year of college and my sister, Suzi had just graduated from BYU.  She wanted to do something fun before accepting post-grad reality, and I didn’t have anyone begging me to be their roommate for college year #2 so we put our 22 and 18-year-old heads together and decided to go backpacking to Europe.  It was a brilliant plan, really, especially considering neither one of us had any money.  So we called our Mom, asked her if she would spot us until we could pay her back, and would you believe?!  She said yes.  My mother, who had 7 children and ground her own wheat to make bread and used chocolate powdered milk to make fudgesicles because she had to be resourceful as a stay-at-home mom being supported on a teacher’s salary, said YES.  Not, “Excuse me, but the last trip *I* took out of the country was to cross the border to Tijuana to get the car painted, so how about I go to Europe and I’ll send you a postcard.”  To this day I consider it one of her greatest acts of love.  I’d like to think I pay her back every time I write something warm and inspiring on this blog…oh, crap.  Maybe I should just get her something really nice for Christmas…?
So, Suzi and I went shopping for backpacks and money purses that we could strap on under our shirts to protect our cash and hopped a plane to Europe. One major bonus was that my other sister, Lori was living in London at the time so we enjoyed some serious sister bonding with her before exploring the continent.  One such day took us to downtown London – we posed in Picadilly Square, lunched at the Hard Rock Café, and posed with the Royals at Madame Tussaud’s Wax Museum.  We gallivanted through Harrod’s and eventually the three of us took up the sidewalk as we strolled the side streets to window shop.  There we were, chatting and shopping and moseying along when all of the sudden I looked up, and there he was.  Pierce Brosnan.  With one hand in the pocket of his black suit he was sauntering toward me like any other citizen on the streets, except to me, THIS WAS NO ORDINARY CITIZEN.  I still remember thinking, “Holy crap, he’s even more beautiful in person.”  His eyes were mesmerizing, so much so that I stood in a trance before realizing that he was passing me, and I was missing it, and AREN’T YOU GOING TO DO SOMETHING YOU STUPID GIRL?!  I had a camera!  In my pocket!  Because I was a tourist!  And the love of my life was passing me AND I WASN’T ASKING HIM FOR A PICTURE!
Truth be told, I didn’t want to bother him.  I wanted to show him that I wasn’t like all the other silly girls who giggle and act ridiculous, no, I was way too mature for that.  Except celebrities tend to respond better to the gigglers who ask for a picture and pose for a split a second better than the really mature ones who are like, “Dude, I mean ‘Chap’, I don’t need a silly picture I just want to settle down and have your babies and make you oatmeal in the morning.”  He ducked into a clothing store and I paced outside of it as I watched him trace his hand along the sleeves of a suit, and I wondered what to do when he came out.  I’ll tell you what I did!
I watched him leave.
And then in total frustration and panic to capture at least a portion of this moment, I snapped a picture…OF HIS BACK.  This is all I have to show for it: 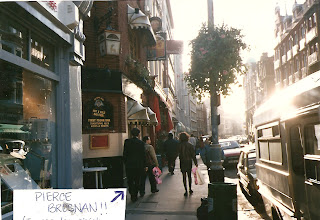 Sounds like something I would have done. I did meet my high school celebrity crush and this is what I said to him, "My mom bought your video and we watched it like...twice." How embarrassing. Talitha was standing right there, she can vouch for how stupid I sounded!

Buffy: You can't leave me hanging like that, who was it?

I love it! I'll have you know that I recently finished watching all 5 seasons of Remington Steele straight through for the 2nd time. I watched as a kid with my mom and now we have them all on DVD, so I can watch whenever I want--fantastic:) Which by the way, when I watch for the 3rd straight time, I'll be stopping at season 4 and will then make up my own happy ending. Such a great show:)

I met the love of my life last year in Denver. I was, well, older than college and still acted the idiot. But I do have pictures!

Such a great story. I still remember you telling me that. Remember Alison and Dee's pictures with him?

You know he still looks gorgeous from behind.

At least you got his back. What great hair he had/has!!

How about the time that I stood in line at Sundance in front of Lisa Kudrow, her husband and son. She even tapped me on the shoulder and said, "Another line is open over there if you'd rather not wait."

And I just stared at her and said, "You really remind me of my sister."

They look nothing alike....I don't know what was wrong with me.

PS You made my night by emailing the other night.

Um.....I just sounded as pathetic as I did to Lisa. Good Night!