Check Out My Sexy Legs

First of all, I kind of feel sorry for you right now because if this post is intriguing to you based on its title, you are about to be disappointed.  Also, if you believed for a second that I might be posting a picture of my legs you obviously don't know me.  If you did, you would know that "sexy" and "legs" are never used together in a sentence to describe me.  "Crazy" and "chick", however?  Happens all the time.  Instead, today's post is about my recent DIY project.

In short, I wanted some large, pillar candle holders but I didn't want to spend 3 therapy sessions worth of money to do so.  A few days ago I was at Kohl's where they had pillar holders on clearance, but even on sale it would have cost me about $140 for three of them.  Booooo...Hissss....  Plus, I think I have already paid for the CEO of Kohl's to send all of his kids to college.  So then I remembered my obsession with this website, and I read a post a while back that gave me a brilliant idea.  Now instead of giving up therapy and sending more kids to college that aren't mine, I found a way to display big candles in style without breaking the bank.  Here's what you'll need to do.


FIRST - Go to your nearest home improvement store and look in the lumber section for table legs.  (Not to be confused with "turkey" legs.  This is not the Renaissance Festival or Thanksgiving at your Grandma's.  Home improvement people.  HOME IMPROVEMENT.)  Here are the three that I picked out: 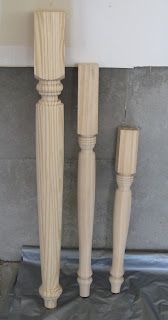 SECOND:  Turn them over. 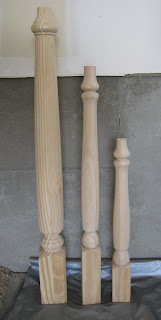 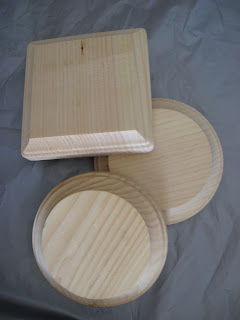 Glue them to the tops (technically bottoms) of your legs and let dry completely.
FOURTH:  I broke out some stain that I had leftover from a previous project, and applied it to the legs. 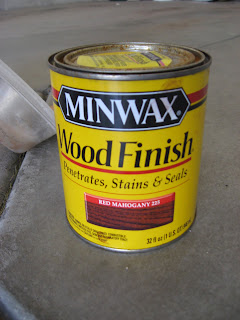 FIFTH:  I sprayed a layer of clear spray paint (again, leftover from a previous project), and topped with cheap candles from Wal Mart.  Here is the finished product: 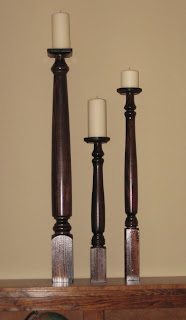 Shall I start calling you Martha?

I love these! I need some candlesticks for my dining room~ I think these might just be perfect!!!

my daughter came over to have me sign some school papers just as I clicked on your blog. After reading the title she says in a totally disgusted voice, "Who's blog is THAT?" When I showed her what it was really about she was all impressed, as am I. WOW!

If I hadn't read this post and were to visit I would be looking all over your house for three legged tables, but yes, they look nice.

Love them!!! Now if you could show me how to paint my subfloors...

Ugh. I hate to admit it, but those are AWESOME! AGH! Curse you crafty creature!

Jill took my comment. But I think you're cooler.

There is nothing I love more than before and after pictures b/c those are simply...muy bueno (aka awesome)