A little over 10 years ago I was lying in bed with flu-like symptoms, sleeping in on a Saturday morning when the phone rang. Cory picked it up, and when the voice on the other end introduced himself I saw Cory sit up a little straighter signifying an interest in paying closer attention. I listened to Cory’s side of the conversation half-heartedly, curious about the cause of his sudden good posture but not feeling well enough to decipher it. After all, “uh-huh…okay…that sounds great…” didn’t offer very concrete clues. I waited until he hung up for the explanation.

He didn’t have to say much.

“That was Reggie McDaniel,” he said. And then I understood.

If you are a Denverite you may have heard Mr. McDaniel, a.k.a. “The Everyday People’s Entertainment Guide” give his critiques on movies as well as restaurants during his career on the news and radio here in Colorado’s capital. He even conducted an interview with my brother back in 2001 to help promote his movie and gave it rave reviews (as he should have!). One afternoon while driving in the car, we were listening to Reggie regale his listeners with succulent details about a recent restaurant visit when Cory said, “Someday I would love to go out to eat with Reggie McDaniel. Don’t you think that would be fun?” Yes I did. Cory’s birthday was coming up, so I wrote Reggie a letter, told him what my husband had said, and made my request. Reggie called the day after he received my letter to surprise my husband and invited our whole family to lunch. Sweet!

Over our meal he explained why he fulfilled our request. “I get a lot of people telling me that they want to go out to eat with me, but yours is the first letter I’ve ever received making a request for someone ELSE that they cared about.” He predicted that our relationship would last, (incidentally, I do too.  Not because I scored him lunch with a food critic, but because he gives good, good love) which I found endearing. We had a great time that day, and I have loved listening to his reviews, movies, restaurants or otherwise for all the years we’ve lived here. Reggie passed away this morning - now I’m not sure who to trust to tell me if Angelina Jolie turns a good performance or if the Rainbow Asian Grill serves up tasty frog legs. One thing I do know? Nobody rocked a purple suit with more flair, and he will be greatly missed. 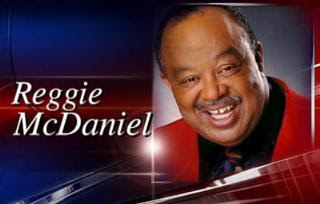 I was listening this evening to talk radio (I know big suprise). A caller to the show spoke about Reggie to the host (Michael Brown) and gave his condolences. The host talked on about Reggie and his show, how it always made him happy to listen to it. Wrapping up the conversation the host said, "not to be disrespectful but I wonder what color the suit that Reggie is being buried in will be. Not since The Mary Tyler Show episode, The one with the funneral for the clown that was trampled by an elephant named peanut, have I ever thought of a more appropriate and heart warming thought. Anyone who listened to Reggie McDaniel knows just how sweet that question is.

Great story! I enjoyed his reviews as well and have missed them!

Last saw Reggie at the premiere for Despicable Me at Cherry Creek. It was easy to see he wasn't doing well, yet he still had a kind word for everyone who wanted to visit with him.